The Ice People by Rene Barjavel and Charles L. Markmann

The discovery of a signal, thousands of feet below the Antarctic ice, turns a small French expedition into a billion dollar investment broadcasted on live television worldwide. What they uncover will change the history of mankind forever. Encased within a golden orb amid a metropolis, a man and a woman lie in cryogenic stasis – preserved with temperatures that modern science cannot replicate. The ruins are dated to be over nine-hundred thousand years old. This book is a romantic science fiction, and focuses on mankind’s repeated mistakes through the course of history, hinting at our fate in the future through the downfall of a people that thrived nearly a million years ago.
I don’t know if it is Barjavel’s writing style or Markmann’s translation, or a combination of both, but the precision and simplicity of the writing is such an easy and refreshing break from the over-descriptive prose found in many novels out these days. The plot is innovative and fast-moving, combining elements of history, science, and romance that are all interesting and believable. I usually prefer little to no amorousness in the books I read, however I was surprised that I not only didn’t mind it, but enjoyed it. One does not have to be interested in either science fiction or romance literature to appreciate The Ice People. The characters are engaging and in-depth; Eléa is a strong female character with great strength and intelligence, the reader will ponder what secrets the man, this supposed omniscient figure encased in ice will hold. René Barjavel and Charles L. Markmann have you hanging onto every word, every cliff-hanger, and every memory, leading up to a completely unanticipated twist-ending that leaves you pondering the longevity of our race in the future.
The Ice People does contain eroticism. It is mild, yes, but still present, as it is an important part of the plot-line. The mature themes are carefully written in quite a poetic way that I found clever and appealing. However, those who cannot take it seriously and/or appreciate it are not the best audience for this novel. With maturity levels taken in mind, it is recommended for readers that are over thirteen years of age. The other downside to Barjavel’s selection of novels apart from this one is that the translators vary, and some are better done so than others. For example, my Mum and I found The Immortals, another novel by Barjavel but translated by a different person, to be an uncomfortably jittery and ungrammatical read.
Overall, The Ice People is a timeless and pleasingly written science fiction that I believe any reader in their teens and over, male or female, young or old, can thoroughly enjoy and appreciate. This book gave me the realisation of an immense variety of translated foreign literature that is waiting to be read, but something you have to search for to find. 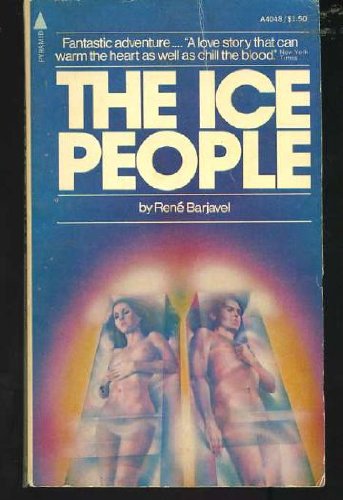