If you're looking for a thrilling, romantic dystopian novel, Insurgent by Veronica Roth is a great choice. In this exciting sequel to Divergent, Roth successfully combines action and adventure with romance and drama. The result- a riveting story that keeps you hooked from the very beginning then leaves you breathless at the end.

One of the things Roth does best in Insurgent is illustrating the emotion behind the events. Through the eyes of the main character, Tris, we get a feel for how each unfortunate event affected her emotionally as well as physically. All the emotions Tris experiences are well described and fit the circumstances to make every character feel more real.

Another prominent aspect of Insurgent is the stirring theme. Roth uses the conflicts and problems in the book to not only reveal that the world of Insurgent is dystopian, but also to show why it it is a corrupt world. She doesn't make it obvious that the faction system, with each group of people supporting one good trait, is a bad idea by making the characters loathe it from the beginning. Instead, Roth has the main character support the faction system at first, then slowly begin to see, through her Divergence, that being compatible with several factions, and therefore having several positive ideals, would solve the conflicts between the factions. Roth shows us how honesty, peace, selflessness, bravery, and knowledge must work together in order to succeed in creating a comfortable society.

The main part of this book that some readers may not like is the romance. For readers who find romantic drama and relationship troubles annoying, reading Insurgent can get tedious at times. Although the relationship between Tris and Tobias adds to the story, in parts it is over done and even at times mildly inappropriate. Although Roth depicts their relationship very well, she often inserts romantic parts where it takes away from the action of the story and just gets boring and irritating.

I would definitely suggest Insurgent by Veronica Roth to readers over the age of 13 who enjoy books that are packed with high-action and suspense and don't mind romance. This book is fun and exciting to read as well as memorable and thought-provoking. 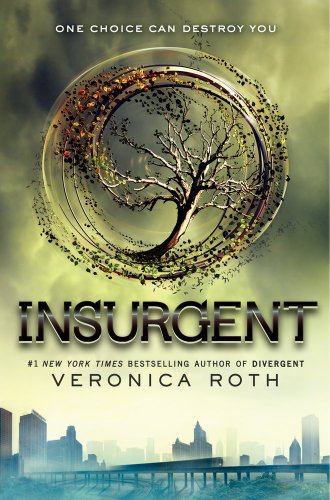 View profile
Have you read the first book in the series, Divergent? Thanks!
GreyGirl ELITE said...
on Oct. 9 2013 at 11:12 pm
GreyGirl ELITE, Pohang,Kyungbuk, Other
170 articles 122 photos 391 comments
View profile
I can't wait to read this book :D Good reveiw!