If I Stay by Gayle Forman | Teen Ink

If I Stay by Gayle Forman

Warning: This ia a short and subjective review of If I Stay by Gayle Forman and it does contain small spoilers.

First published in 2009, If I Stay caught my attention due to the upcoming release of the film adaption due to hit cinemas on September 19 of this year. Although 321 pages long I managed to finish the novel in one day with relative ease, which I attribute to the conversational tone of the writing as the first person narrator, Mia deliberates making a life or death decision.

The book is centered on a small pocket of time in which Mia Hall, a young and promising cellist, is involved in a car accident along with her parents and younger brother. Mia views the aftermath of the crash, the ensuing emergency surgery and the ICU of the hospital where she is residing in a coma, as an out-of-body experience. During this time she also recounts memories of her life as she watches those closest to her visit her bedside.

The story is deeply rooted in love; the love of family, of music and the love Mia has for her boyfriend Adam. It’s this love that makes it so hard for Mia to wake up and live in a world where her parents and brother are dead, but it also makes it difficult for Mia to slip away as she would be leaving behind Adam. The way that love is approached in this story is similar to most other young adult fiction with the exception that there was a slight light and shade quality to the relationships Mia had with her loved ones. The narrator reflects on the conflicts that love brings, especially the questioning of one’s identity when compared to someone who is admired. Mia constantly describes herself as the “fish out of water” in her family, her being a devoted classical musician in a family of extroverted rockers. Music is a common thread in the story, holding together many of the characters and present in most of the anecdotes. It is what brought Mia and Adam together and what ultimately brings Mia back to her body.

I found that the theme of identity was quite evident; the searching for identity, the ownership of that unique identity and the evolving of identity as one grows up. One example being how Mia’s father decides to drop out of his band and become more responsible after fathering two children. I felt that both the themes of love and identity were nicely balanced but rang a bit shallow overall.

The main thrust of the novel is, of course, the question of whether Mia will stay or go. It is a comforting concept that we get to decide whether to live or die and I felt that I could really connect with Mia as she struggled with her mortality. Personally I would’ve like more inner dialogue along with the many flashbacks as I felt that this story held potential to spark an intriguing philosophical discussion. However the voice of Mia Hall was quite compelling and I felt myself moved at the conclusion of the novel.

The movie, directed by R.J. Cutler and starring Chloë Grace Moretz as Mia, promises to be quite heart-wrenching in a Nicholas Sparks kind of way and I must admit that after reading the book I will definitely by there, tissues at hand. 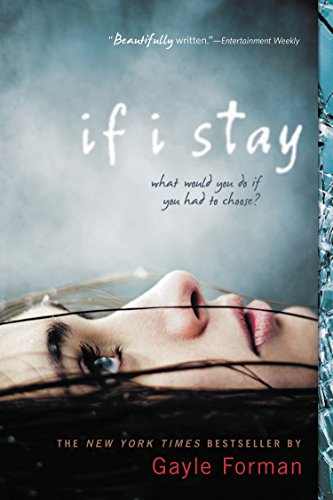 I was really excited after watching the trailer for the new movie "If I Stay" and I was elated when I discovered that it was firstly a book.

View profile
Thank you so much for the wonderful compliments. I'm happy that you found the review helpful and I'm always glad to recommend books :)
TheComet PLATINUM said...
on Sep. 7 2014 at 3:24 pm
TheComet PLATINUM, Mostaganem, Other
22 articles 1 photo 439 comments

Favorite Quote:
"Speak when you are angry and you will make the best speech you will ever regret" -Ambrose Bierce
" Be yourself! Everybody else is already taken ;)"
"Don't go where the path leads you. Go instead where there's no path and leave a trail ;)"-R.W.Emerson

View profile
Very well written! Great job on describing the story. You really made me exited to read it. It sounds so interesting and very moving. Even though I don't know the story yet, I have to say: Wonderful job on the wording, it's like the msg you wanted to share really got into me so mission accomplished ^_^ Keep it up and thanks for sharing this. I'll definitely look up for it and read it :D