Oh, I had so much fun with this book! I laughed and cringed along with the characters at the embarrassing moments, sighed and swooned over the many, many, MANY romantic scenes while catching my breath and holding onto my metaphorical hat at the perils Cami and Hunter face during their second adventure.

Hunter is sent undercover with a dangerous car thief and suspected murderer who goes by the inauspicious name of 'Ripper' at the beginning of Smitten. He does his best to keep Cami out of his work, but with one careless (albeit very romantic) mistake, he inadvertently pulls her right into the middle of it. Hunter's protective nature is strained to the very limit. I won't say more except that it gets very, very messy and is highly entertaining.

The villains were nicely done; I found myself looking at Ripper and wondering, going back and forth in my mind whether to believe he had committed all of the crimes he was suspected of or not. By the end I had a pretty good idea, but I was still surprised by a couple of things.

For those who haven't read it, I will say this without spoilers. For those who have read it, you know what I'm talking about. Page 226 (page number may vary slightly depending on the format). Oh. My. Freaking. Goodness. Only Lacey Weatherford could have pulled that off, and it was AMAZING. Other than that, my lips are sealed.

While Smitten didn't replace Crush as my favorite Lacey Weatherford book, it was a wonderful sequel. While it appears to be the end of Cami and Hunter's story, maybe with some well-aimed and not at all subtle hints she could be talked into another one...? We can always hope.

I received an advance e-copy of this book from the author in exchange for a fair and honest review. Thank you, Lacey, for listening to our pleas for a sequel to Crush! 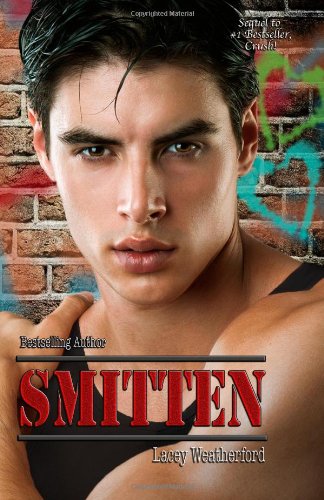