This series never disappoints. Russell and Holmes were just as entertaining a partnership as ever as they continue in their habit of sticking their noses into other people's hornet nests. In this case, Morocco on the edge of war.

I have a weakness for stories involving amnesia, so when Russell woke up in a strange bed with no memory of her own name or anything else, I was delighted. Using only her wits and some skills she is surprised to find herself possessing, she sets out to find out where she is, who she is, and why someone is after her. She gains an ally in the form of a mysterious, mute urchin who seems to know more about her than she does.

A substantial part of the story is told from Holmes' perspective. Seeing him worried over his missing wife and partner to such a degree that it neared true discomposure was oddly entertaining. He shows emotions so subtly that certain phrases and facial expressions are as close as he comes to hysteria. I rather wish that Russell's amnesia was drawn out more just to prolong Holmes' understated concern. Is that mean of me? My favorite moment of the entire novel is when amnesiac-Russell finds worried-Holmes whilst having no knowledge of who he is.

As is usual in Laurie King's books, the mystery is set against a fascinating historical background. In this case, mid-1920s Fez approaching the Rif Revolt. Starting out with very little previous knowledge of this time and place in history, I found it very interesting. A real-life historical figure, Hubert Lyautey, is introduced as Holmes' cousin, thus drawing our hero and heroine into the intrigues and troubles of the day.

I enjoyed the new characters introduced, particularly Lyautey and Idir, the mute boy who helps them along the way. I also loved the appearance of a some old friends (whose names you will have to discover for yourselves).

This is a wonderful addition to one of my favorite series. It is neither my favorite nor my least favorite of Holmes' and Russell's adventures, but rather falls somewhere in the middle and perhaps leaning toward the favorites end. I would definitely recommend it to fans of the series; it should not be read out of order as it references multiple previous novels, though the mystery itself is stand-alone.

I received an advance copy of this book from the author in exchange for a fair and honest review. 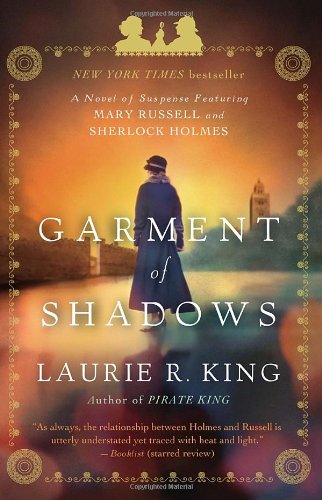