Favorite Quote:
Life is a boomerang. It's up to you whether this intimidates you or empowers you.

‘Enola Holmes’, sister of Sherlock Holmes to be exact, is a light-hearted family adventure drama of a young girl, where she is one step ahead of her famous detective brother. She is faced with decoding secrets and running into woods and secret doors in her quest to find her missing mother, who has been her teacher, friend, and mentor for her hungry mind.

Enola Holmes, a 2020 Netflix movie released on 23rd September is a new Holmes mystery movie, but very unlike the usual Sherlock one. It is based on the first book in a series by Nancy Springer with Sherlock’s teen sister- Enola playing the detective.

Directed by Harry Bradbeer, Enola is on a journey searching for her missing mother using her sleuthing skills and evading big brother Sherlock in the pursuit. Enola – which is ‘Alone’ spelt backwards, is raised by her mother in an unconventional way.

She is home-schooled by her mother, another spirited character doing exactly as they pleased in their sprawling countryside mansion. She was trained to paint, self-defence, play tennis, with extensive hours of reading in her well-equipped library.

But then, her mother disappears suddenly as Enola turns 16, leaving her daughter to fend for herself as she escapes from home disapproving of her older brothers who returned to check on her.

Mycroft, one of her brothers, is snooty, scheming, and insistent on sending his unkempt and unruly sister to finishing school. Sherlock, on the other hand, understands her spirit and is appreciative of her intelligence, sharp mind, and spry demeanour.

She is left to fend for herself while she follows a series of cryptic clues in her search for her mother. Enola travels by train to London, and runs into Viscount Lord Tewksburg, Marquess of Basilwether, who is running away from his family. She jumps out of trains, fights with thugs, blows up places while putting the pieces together of her mother’s disappearance.

As luck has it, while saving the Viscount and understanding the mystery behind the sly plans of his family, she indirectly helps her mother in achieving the purpose for which the latter disappeared from their countryside house.

Enola and her mother are in stark contrast to the English patriarchal society and are fiercely supportive of female liberalisation. ‘To marry off and make someone a good wife’ is not what Enola dreams of, and this was the major conflict she had with Mycroft. ‘Our future is up to us’ says a confident Enola as taught by her mother.

So, to conclude, ’Enola Holmes’ is an entertaining, fast paced, and gripping story, with great sets, costumes, cinematography, direction, and performances blending adventure, with excellent comic timing set in the background of a patriarchal society with women fighting for their rights. All-in-all a good watch for the weekend! 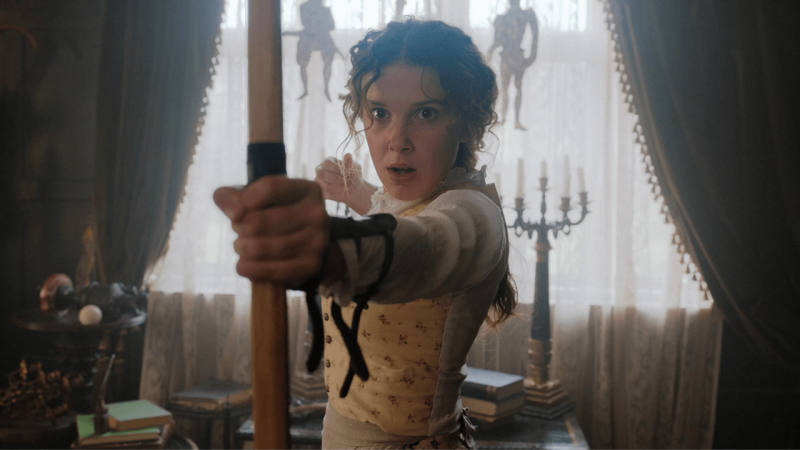 I loved the fast pace of the movie, the underlying theme, and the fact that (for a change) the focus is off Sherlock!!