Whiplash is a short film about this guy named Andrew who wants to become the best drummer of all. He goes to his first band practice and looks at the picture on the wall of a person who is playing the drums. As he was about to try it out, the other band members came inside the room and got to their positions. The teacher comes in and the students stop what they were doing and listens to him. They began to play the song “Whiplash” and everything began to seem alright until a student messed up. The drummer switches with Andrew and tries it out. As Andrew was doing his part, he began to do alright and then got yelled at for his mistakes.

In the short film Whiplash, the bad thing about this film is that all the band students are trying their best but they would get yelled at for their little mistakes. The teacher is the kind of guy who wants his band to be successful and wants everything to be perfect. For example, one of his students was off note and the teacher was trying to figure out who is making that mistake and then yells at everyone because he is trying to see who it is. As he figured out which student that was making that mistake, he kicked him out of the band and continued on without. Another part that I think of the short film that is bad is when Andrew was playing the drums and then they go on break, the teacher goes up to Andrew and asks him questions about his life. As the teacher asked him those questions, they went back into the room and got set. Then the teacher noticed that Andrew was messing up on the drums and then began to be abusive and disrespectful towards Andrew and threw a chair at him.

The good part about the short film Whiplash is when all the students are playing the song Whiplash very well. I enjoy the jazz music that they are playing because it’s very catchy. All the students are working hard together and trying to not make any mistakes so they won’t get yelled at or anything. The teacher is doing his thing as the teacher of the band and fixing mistakes as they’re playing. Andrew is doing his best to turn the pages for his partner so he could read the notes and go on with the music.

In conclusion, this short film has a lot of things going on in the film. There are pros and cons about it. It has a lot of emotion that is going on with the band and teacher. The band is doing their best not to get into trouble with the teacher and the teacher is trying to do his thing by fixing mistakes so they can play well in the contest. 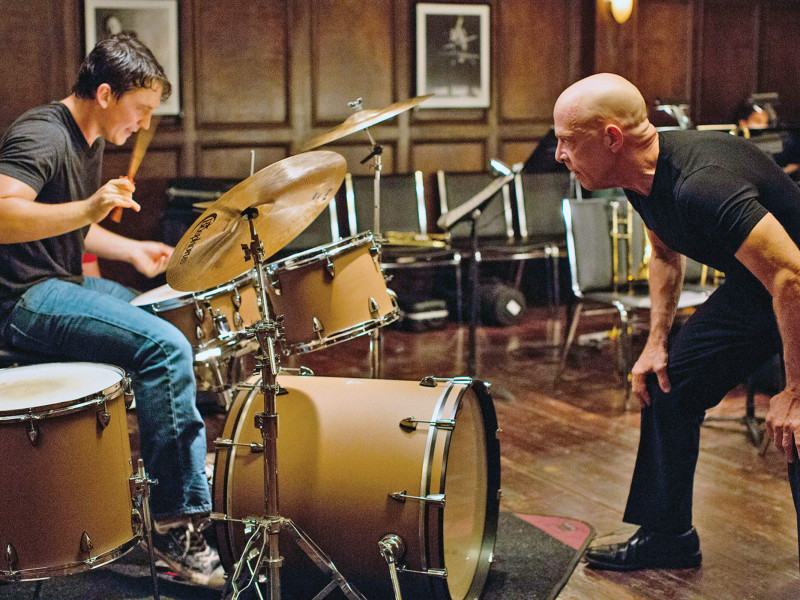 Whiplash is an interesting film, I enjoy the story and the scenes.