As we all know, nowadays, superheroes are old news. They became boring and their stories are unbearably bleak and pathetic. It’s the same old story where the main villain has a pointless goal to take over the World and tools to make their evil dreams come true. Only the character X could stop him or her; however, he will have to face the devastating and heartbreaking consequences of villain’s actions. By the end, the World and humanity’s destiny will be hanging in the balance and the villain will be fully ready to become a World bloodthirsty, mean leader and to end up with the character X. At the very last moment there will be a miracle that will save the entire humanity and defeat the villain. Everybody’s happy and starts to dance and celebrate the justice. This plot annoyed all of us. Honestly, there is no fathoming the depths of my hatred for this kind of films. The critics find them hard to watch because these typical stories always repeat. The movies themselves may be different but the main plot remains unchanged.

There are three types of characters in films: positive heroes, villains and antiheroes. I’m pretty sure that every person on this planet is able to explain the difference between the heroes and villains but only the small part of entire human population knows the definition of the term “antihero”. Antihero is a kind of characters that are well-intentioned and have positive aims. However, their actions can be unbelievably dreadful and vicious. Most people scream “Blimey!” after finding out the character’s methods to get what they want. Antiheroes can be traitors, murderers, robbers, vandals, kidnappers etc. That’s the main difference between antiheroes and heroes. Unfortunately, they are not so popular because there is a large chance that viewers might not like them and cancel them.

Craig Gillespie, the director of “Cruella”, had an enormous wish to make something new and extraordinary. He knew that his character must be an antihero. He always found them heroes’ proper competitors. After a long time, he invented a diabolical, marvelous, brilliant and a little bit mad fashion designer – Cruella.

Estella was a 20-year-old young and audacious lady with a traumatic and tragic past whose lifelong dream was becoming a famous and unforgettable clothes designer. She was a dab hand at sewing and creating new ravishing and fabulous gowns. She had only one goal – to organize her own fashion house and to create a label. Unfortunately, she had a Baroness von Hellman on her way. Baroness is an iconic fashion designer whose dresses amazed rapturous critics with their unusual shape, material and appearance. She is at the height of fashion. Her signature pieces were exquisite taste, elegance, strict forms and delicacy. She was stunning and violent at the same time. But Estella wasn’t a pathetic coward, and she didn’t fear her. She even created a new name for herself – Cruella. Will Cruella overthrow Baroness from her fashion throne? Watch this movie and find out.

In this film we can see how Cruella became the elegant villain we know today. The story is completely original, in a different time period being in the late seventies. It has incredible songs and visual effects that pull you into the screen. One of the most fun things to explore is her creativity. She’s very good at what she does. I hope it feels like you can get lost in this world of fashion and rivalry.

I think this film inspires us to be bolder and not to hide your true authentic self because that is who Estella is discovering, as she turns into Cruella de Ville. 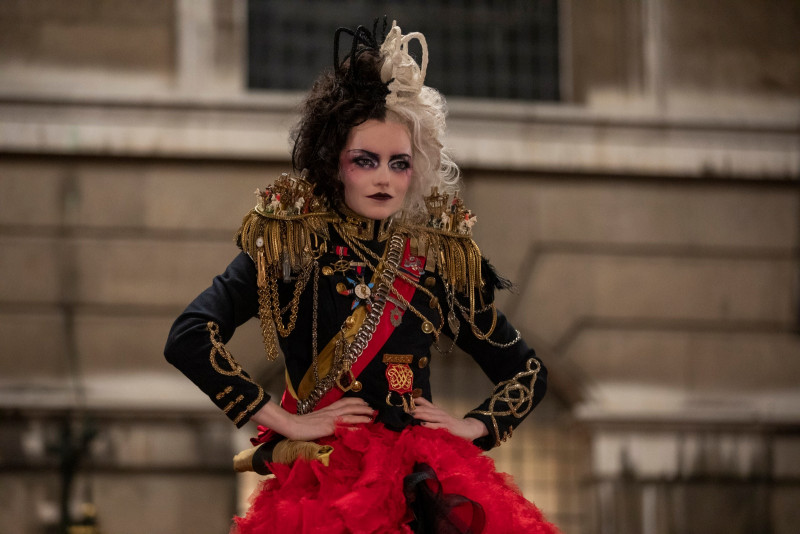