Transformers: Revenge of the Fallen

“And so I send this message out to any surviving Autobots taking refuge among the stars. We are here and we are waiting.” If, for some reason, that soliloquy by Optimus Prime at the end of the Transformers movie from 2007 wasn't enough of a giveaway, director Michael Bay and Executive Producer Steven Spielberg put, in the credits, a shot of the Decepticon, Starscream, flying into the far reaches of space. Everyone who saw that had to have known that he was going back for reinforcements, the question was what reinforcements? This blockbuster sequel, Transformers: Revenge of the Fallen, gives us that answer and so much more. (Oh, and when I say blockbuster, that's just because I couldn't think of any other word to describe the sheer size of it.)


The first movie was basically a back story of the Transformers that was 2 hrs., 23 mins. long. We learned that the Autobots and Decepticons are both part of a super-intelligent race of alien robots that used to live in peace on the planet Cybertron. The Decepticons ignited a civil war that drained Cybertron of its resources and the only thing that could save it - the All Spark cube, a concentration of pure energy - was lost to the vacuum of space and crash-landed on a small blue planet called “Earth.”

The protaganist, Sam (played by LaBeouf), believed that when he shoved the All Spark into Megatron's chest that he was through with finding ancient artifacts and saving the world from impending doom. He was wrong, because now, just as he's going off to college, he finds a shard of the All Spark and begins to see strange hieroglyphics appear before his eyes. As it turns out, the All Spark was more than just a power source, it was a map leading to a completely different power source. The Decepticons need this power source, because with Cybertron and the All Spark gone, they have no energons to power the robots being born. Apparently, though, these aliens have been on Earth for a very long time. The first of the race were called Primes. Megatron's master, The Fallen, is one of the first while Optimus Prime is a direct descendent of those first few. So, to sum up a plot that, according to this movie, has been going on for several thousands of years, the Decepticons must find this alternate power source to rejuvenate The Fallen and power a doomsday weapon with the intention of taking out the sun. And because only a Prime can defeat a Prime, Optimus Prime becomes the only one who can stop The Fallen and save the world (which gets pretty complicated towards the middle of the movie, but I can‘t give away everything).


Many complaints I have heard about this film include the complete waste of the plot; that all that happens is stuff blowing up. My answer: Who cares?! Transformers was not only one of the coolest cartoons ever, but the fact that the cartoon has been remade so many times is a testament to its never-ending novelty. Transformers is one of the greatest licenses of all time and the possibilities are endless. And, I just got finished, in the best way I knew how, summarizing a space saga that has lasted longer than human existence on the planet Earth. Anyone who doesn't see the potential depth for that plot was only looking on the surface. I saw this movie as being more than two breeds of robot blasting each other to bits, but more on that later. Another thing I heard that seemed to get people upset were the characters of Skids and Mudflap, two twin Autobots who answered the call from Optimus and traveled to Earth to aid him. They are said to be very stereotypical of African-Americans. This is one aspect of the movie where people are reading into it too much. First of all, they are robots and secondly it's a movie for Pete's sake. These two are like the Jar-Jar Binks of Transformers; when everything is blowing up and people are getting killed, you need some kind of comic relief. What do they sound like? Well, imagine this: you are on Xbox Live playing Gears of War or Call of Duty or even Madden and you are playing with two friends who spend the whole time talking smack about everyone on-screen, including their own team. Yeah, it's pretty ridiculous, but incredibly funny. And I don't mean chuckle-chuckle funny, I mean laugh-out-loud-rolling-in-your-seat-funny. And let's not forget Devastator. Devastator is a logic-defying amalgam of about six or seven Decepticons that, in the middle of transforming, connected to each other to make one behemoth of a robot about half the size of an Egyptian pyramid. My only complaint about this movie is that while they put a lot more robot action in this installment, they are still missing a whole lot of Bumblebee. However, what they do have of our favorite yellow Camaro is absolutely amazing. Shia LaBeouf is seen not just as the kid who's grandfather had the map to the All Spark imprinted on his glasses, he is now the only human seen fit to possess this new power source. As for Megan Fox, well…her acting was incredible again, but, let's face it, any amount of Megan Fox is a plus for any movie.


As I said before, this movie is about more than two races of robots who have been fueding for millions of years across the known universe and have now taken the battle to Earth (even though that is the main focus). Optimus Prime said to Sam, “Fate rarely calls on us at a time of our choosing.” He is absolutely right and that is part of why Optimus is such a great character. Whenever he's not dealing a death blow to the forces of evil, he's dishing out some priceless piece of wisdom, but I guess you would be too if you were a super-advanced alien thousands of years old. The undertone of this movie, to me, seems to be about fate. It shows, through Sam's character, how humans tend to deal and/or contend with things that are out of our control. As in the first movie, Sam spends the first half running from it and is promptly redirected towards it with the help of one of the original Primes. All in all, this is a bonafide summer hit. If you want to be supremely entertained and, for some, a little more enlightened, then go see this movie right now. If not, there's a good chance you don't have much joy in your heart…or you're just not a nerd like me (probably that second one). Either way, it's a solid movie.
4.5/5 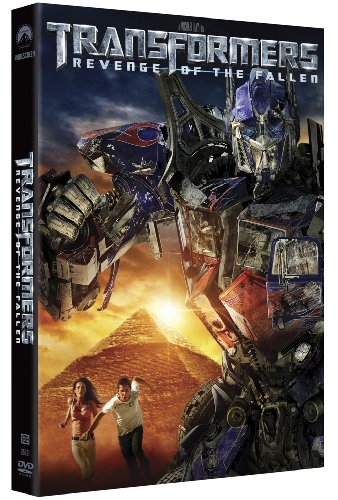 poper said...
on Mar. 4 2011 at 10:08 am
seen all both transformers movies cant wait to c the third
demartinot said...
on Oct. 28 2009 at 12:42 pm
This seems like an accurate review of the movie. I have not seen Tranformers 2: Revenge of the Fallen, but I did see the first one and it kept me on the edge of my seat the whole time. Shia Labeouf is an amazing actor and almost makes you feel like you're in the movie. I agree when you say that the fact that an awesome cartoon was made into an action-packed movie is really special. I think this is true because a lot of amazing comic books were made into great movies! I also think it was a great idea to give the background of the first movie for people who saw that movie a long time ago. This was a great review and I hope to see it soon!
LILD811 said...
on Oct. 13 2009 at 1:19 pm
LILD811, Eatonville, Florida
0 articles 0 photos 3 comments

Favorite Quote:
When life gives you lemons you make lemonade

Favorite Quote:
You unlock this door with the key of imagination. Beyond it is another dimension - a dimension of sound, a dimension of sight, a dimension of mind. You're moving into a land of both shadow and substance, of things and ideas. You've just crossed over into the Twilight Zone.

View profile
Very good review. I saw this movie over the summer and found it to be very enteraining. Yet, I have no clue why critics nitpick it to death. They got to understand that this is an action movie and not a cinematic masterpiece in any way.
ThomaB said...
on Sep. 24 2009 at 7:46 pm
Overall this was a decent review, and since I saw the movie I know what was going on. Now when u said, "that could save it - the All Spark cube", it might have sounded better like this, "that could save them is the, "All Spark Cube". Also when u stated Shia LaBeouf's name like this, "Sam (played by LaBeouf)" it might be good to say Shia LaBeouf so people could know his name if they were unknown of him as an actor.
KDtheGhostwriter GOLD said...
on Jul. 27 2009 at 8:27 pm
KDtheGhostwriter GOLD, Jefferson City, Missouri
18 articles 0 photos 31 comments

View profile
Please understand, people, that I write most of my reviews as a movie fan and not a know-it-all movie critic. I go to movies to be entertained, not for a living, which is why I gave it a 4.5 out of 5. Looking back on it, I probably would have given it a 4, but had this been a professional review, it would have gotten a 2 out of 5. As far as movie-making goes, the presentation was great, the quality, not so much. It may not have been that good, but it was just too awesome for me to care.