To get things started, let's just get one thing clear- yes, I do like Justin Bieber. Yes- I did like his movie.

Justin Bieber is a pop-star on the rise, famous for posting his videos on Youtube. Not only does he have 4 CD's, a book, a nail polish &amp; body spray line, and millions of adoring fans, he also has a movie. This teen sensation is just getting started in the music business. "Never say Never" expresses a lot of themes.

It shows footage of when he was younger. When he was a baby until he was a child, home movies are included in this amazing film. This movie is a countdown of the days to Justin's important concert- Madison Square Garden. I don't want to give away the movie, but it goes through the ups and downs of being a star.

Most people think it is just a concert film, like the Hannah Montana or the Jonas Brothers 3D movies. It isn't. It does include concert footage, but most of it is his story.

Fan or hater, you should see this amazing film! Even if you are not a fan, you will enjoy the story line. I went to the VIP showing, and there were a few adults there with their kids. I was sitting in front of some parents, and in the beginning of the movie, one said, "Wow. He is really talented." This shows that adults and children will enjoy this movie.

Teenage girls, boys, adults, or kids will enjoy the 3D motion picture, especially if their favorite singer is Justin Bieber. The movie also gave a sneak peak of Justin Bieber's new song, "Born to be Somebody," which is touching, amazing, and my new favorite! Go see Never say Never with you're friends, family, and everyone :) 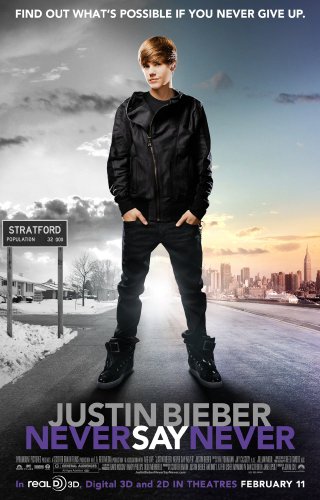 
Buy from Amazon Available on iTunes
The author's comments:
When I saw Justin Bieber's movie, "Never say Never," I had to rate it A google plex stars :)
Post a comment
Submit your own

All right. A few things about me and my experience seeing this movie:

1. I am not a fan of Justin Bieber. Yet I do not hate Justin Bieber with every fiber of my being. (Some of the fibers are reserved for zucchini :p)

2. I did not go to see this film by choice. My crazy friend dragged me because... well, because I owed her for something that shall only be known as the "Clash Day Incident." (let's just say, turns out it wasn't clash day. :\)

2. Justin Bieber should have stuck with being a drummer, because I WILL concur that he is very talented at that.

3. If I ever need inspiration for some meanies in my future novel, I will almost certainly make a character out of his Texan vocal coach.

4. You can tell they spent a lot of money on this thing.

5. Despite its connotations to JB, purple is still my favourite color. :)