Jurassic Park will always stand as an iconic and innovative film. Now, it's back for its 20th anniversary in 3D. Usually, I don't like seeing old movies when they're rereleased in 3D. It's just a way for the movie people to make more money, and it's usually unnecessary. But after seeing Jurassic Park in 3D, I've decided that I don't care if it’s just a scam; it's awesome. Like most readers and contributors on this site, I wasn't even born when the movie first came out. I saw it years later, during my dinosaur-obsessed childhood, and of course loved it. I'll always remember how fast my heart was beating as the water vibrated with the T-rex’s colossal footsteps, or when the raptors’ reptilian eeriness was chillingly juxtaposed with the modern kitchen as they stalked the kids. The movie was epic even back then, on my family's tiny non-HD-TV. And now, on a big screen in 3D, it wowed me like I was 8 again. The swooping music, the dinosaurs’ intricate detail, and the beautiful island scenery were all the more breathtaking on the big screen. It transported me in time, and not just to the time of the dinosaurs; I was transported back to my childhood. The rerelease of this movie might just be to make money, but it means so much more than that to me, and to others I'm sure. It’s a chance for people our age to see Jurassic Park in all its majestic glory for the first time, a chance we missed by being born a decade too late. And wow, there's a lot of glory to be seen. 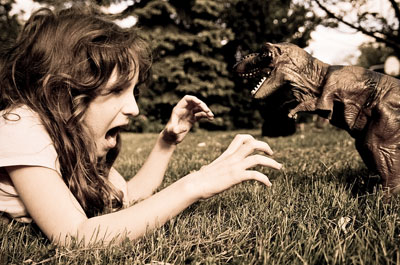