Mean Girls contains everything that Denby confirms as typical banalities of the ever worn out term, “teen movies,” enclosing hyperboles, such as the teenage Queen Bees, the Blond B****, and the Cinderella cliché of a homely girl turned beautiful and perfect. However, the tables are turned on the traditional, as Tina Fey, actress and screenwriter, has created a satire of the categorized cliques and tropes of the high school hierarchy into what is today defined as modern cinema classic. With her use of sarcastic rhetoric and dramatization of the female adolescence, Fey reflects on commonly done archetypes and adds a observing perspective of an outsider who has yet to saturate the essence of her new hormonal environment, or “high school jungle.”

The art of ethos, or decent characterization, is a tricky concept to capture in any film genre, and especially in teen films. Yet, Tina Fey manages to make the most ridiculous of characters have something real beyond the shiny lip-gloss and short shorts. Cady, the female protagonist goes beyond what the normal audience would expect from her. Although Cady does become attractive in terms set by the social movie standard and, yes, does get the guy (though not still the end), she does not fulfill the standard “Cinderella” byline, transforming from “ugly ducking to swan.” Instead, Cady is by all means the exotic beauty, until she inadvertently gets pulled in the mean glamour of the plastics, to which the resolution is painfully reached when she realizes that her shallow behavior and popularity were meaningless, and she reverts to her own intelligence and originality, winning and sharing her Prom Queen crown and dancing with the not-so-bad Prince Charming in a Mathletes Jacket. Also, Cady’s companion, Janis, who does fill the introverted, arty role, is not just not a character, she is an ally, a wisecracking ambassador who attracts the greatest empathy by being a victim of bullying herself, and breaks her set stereotype by not breaking her eccentricity or dating the “hot guy” or “best friend,” but another eccentric. Moreover, the antagonists of Mean Girls, while fulfilling the militaristic Queen Bees of the high school, have differences and inadequacies that ruin the “perfect villain” stereotype. Yes, they are popular, hated, and wear skimpy clothes, but they are not entirely evil; Gretchen is snobbishly rich, yet highly insecure, Karen is the dumb blond, but not overly spiteful, and Regina, upon Cady’s interference, is subjected to the same isolation and rejection from the student body as she had inflected on others, not to mention getting hit by a bus. In the end, their dominating positions are broken, as they go into diverging cliques where their talents are appreciated in ways that don’t intimidate or allow them to dominate over others.
Throwing the sweet Cady into the den of lions, playing a character you instantly sympathize for and, who like most of the audience has been exposed to social abuse and torment, created the fresh and interesting prospective of a teenager who had never before been subjected to the evils of High School, and suddenly thrown in the waters. Nevertheless, Cady adds a sense of refreshing humor to the classic genre with the malapropos comments she throws around, ignorant of slang, popular culture, or standard codes of behavior. Irony becomes a central element to the entertainment of Mean Girls, as comically seen when Cady unsuccessfully attempts to make friends by addressing a group of African American students in an African dialect, or not understanding that the meaning of “Shut Up,” not does actually mean shut up. The irony seems to add profundity to the film as the heroine enters “ a fall from grace,” and does not even realize it herself, until someone alerts her of her own cruelty. “I know it may look like I was being like a b****, but that's only because I was acting like a b****. “
Fey subtly adds depth to the teen movie, by dispersing psychology in manners that reflect Dr. Solomon Asch’s conformity experiments in manner people easily comprehend. “In most cases [people], while they knew the rest of the group was wrong, did not want to risk facing ridicule… these reasons suggest that conformity can be influenced… by a need to fit in.” For those who ever experienced formal secondary education, peer-pressure and social anxiety syndromes are not uncommon things, and prone to make the most stalwart Holden Caulfield, subvert into one’s own uncertainties and flaws.
In what should be a plotline where the geeky girl becomes beautiful and lives happily ever after (or as ever as high school gets) with the Prince Charming of her dreams, usually of the jock-ish variety, Mean Girls is not. Instead, the film uses a traditional “fall from grace” plotline in which the common hero, or heroine in this case, strays from the path of virtue, and falls in league with the devils, or Plastics, becoming the very enemy she had originally detested; an also common occurrence as seen with Peer Pressure and social conformity. Avoiding the sickening twist of the topsy-turvy as the heroine loses her individuality, Cady actually learns the error of her pettiness and is able to regain her original distinctive personality by doing the reformative thing of redeeming and apologizing for her mistakes, a lesson that is not half-bad for any audience. Furthermore, the film, its creator and characters, uses a variety of rhetoric techniques, with Fey as the propos-teacher-mentor who is able to stand outside the standard teen movie typecasts, by understanding and reflecting the manipulative mechanisms and deviations of high school, into a satirized manner that is enjoyed by teenagers and adults. 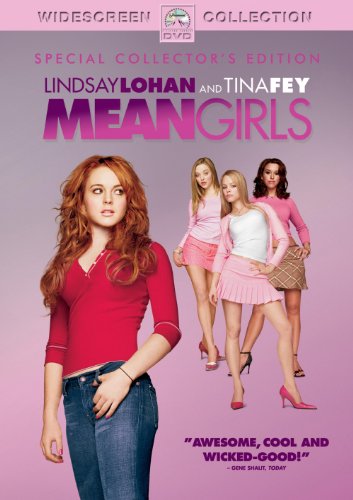 
Buy from Amazon Available on iTunes
The author's comments:
Based on AP Englsih's assignment analysis of Denby's High School Confidential: Notes on Teen Movies
Post a comment
Submit your own