The Battle of the Five Armies | Teen Ink

The Battle of the Five Armies

Who else was disappointed (yet not surprised) when The Desolation of Smaug ended with a certain dragon heading off to turn Laketown to charcoal?

Well, finally we get back to the adrenaline rush.

Smaug is rushing towards Laketown, his stomach rumbling, and the dwarves and Bilbo to watch from the mountainside.

Fortunately, the Laketowners manage to escape Smaug's wrath, but are now faced with a greater danger than fire: Winter. The only safe place to live is the abandoned city of Dale, on the doorstep of Erebor. But a certain dwarf king isn't feeling to welcoming to the new neighbors, or the elf king who arrives to assist them (and reclaim a necklace).

Meanwhile, what of Gandalf, imprisoned in Dol Goldur? It's going to take the powers of Saruman, Radagast, Elrond, and Galadriel to save him, and even then, what of Sauron?

(I can't say too much more because of spoiling it)

While a film prevailing in violence, Jackson and his crew manage to make the story-line deep and sometimes comical, even in some of the most tense moments. This final piece also enriches some characters who seemed rather dry in the last film. Some anticipated cliche endings were artfully avoided (such as Tauriel-love-triangle-death...) There are also several subtle, important lessons to reaped from this film. A lot of lines and scenes are very book acurate.

Some people may be worried about Thorin and Kili rubbing noses in the trailer. I'm telling you: It's a family thing. Some families fist-bump, some head-lock, some nose-rub.

Bard stops an angry mob of laketowners from murdering Alfrid.

As indicated by the title, this is a film mostly comprised by battles, meaning that there is a lot of violence shown. Also, we get several close-ups of Laketowners being consumed in fire, not to mention a lot of corpses.

In the midst of escaping from Laketown, the master and his guards kick and ignore desperate citizens' pleas for help.

Dain Ironfoot (Billy Macullay) is an entertaining character, but uses some foul language.

Alfrid (Ryan Gage), in an attempt to avoid the fighting, disguises himself as a woman, later stuffing coins into his corset to enlarge his chest.

When Thorin is effected by dragon sickness, he becomes a major jerk (think on the verge of singing 'Be prepared').

There is also a nightmarish-vison-sort-of scene of Thorin battling dragon sickness.

We get to see dark Galadriel again. *shivers*

The undead 9 kings of men appear.

P.S. Fangirls will hate the ending for Durin's sons.

P.P.S. Listen to 'the last good-bye' and try not to feel sad. 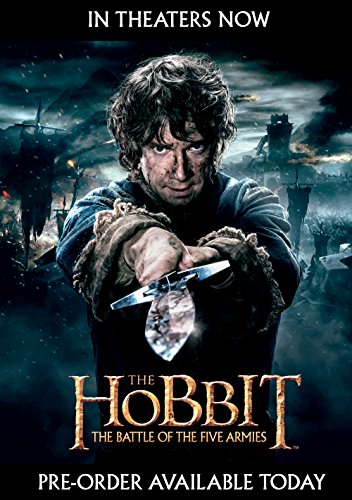 Favorite Quote:
There's plenty of sense in nonsense, if you wish to look for it.
-Cassandra Clare

View profile
I cried like six times in the movie because some of my favorite characters died. I was like "WHAT?!", then "NOOOOOOO!", and finally I just cried silently. I did, however, love how they tied in The Hobbit with The Lord Of the Rings. Best movie trilogies ever!