"I don't want to kill anyone. I don't like bullies; I don't care where they're from."

Steve Rogers (Chris Evans) has plenty of experience with bullies. There's just something about his puny frame, asthmatic condition, stubborness and compassionate courage that invites a fist to the face. But Steve isn't going to let being an under-dog get in the way of serving his country in World War II. But no one except a German professor (Stanley Tucci) sees that it isn't only physical strength that wins a war. Yet Steve's going to need both if he has any hopes of standing against the leader of the Nazi-born scientific army, HYDRA, and their leader, Johann Schmidt (Hugo Weaving).

"Whatever happens tomorrow you must promise me one thing. That you stay who you are. Not a perfect soldier, but a good man."

Steve Rogers is a good man, and a powerful example that strength alone is not a virtue. It takes more than athleticism and good looks to be a hero. He willingly puts himself in danger (to the point of near suicide) for the sake of others (even his enemies), stands up for what's right, and only wants what's best for the world.

His best friend, Bucky Barnes (Sebastian Stan) protects him from bullies, both in the New York alleyways and Nazi bases, and won't gain his own safety by sacrificing Steve's.

Themes of patriotism, faithfulness, friendship, and courage run prevailent throughout, presented in a way that isn't eye-roll inducing.

The acting is great, and the script runs as smooth as a vibranium shield.

Swearing is one of the major points, as often the issue in military-setting films. Violence is also there, but most of it is hidden or speculative (we don't see every moment of violence, and it's debatable whether or not people really are vaporized or transported to another dimension (thanks, Loki!)). There are a couple scenes suggesting torture. A German spy threatens to shoot a child in the head and later poisons himself.

Johann Schmidt believes that he is a god.

There are a couple scenes of Steve shirtless, but for military/medical purposes. Some girls wear short skirts.

Steve complains that one of the bad side-effects of him becoming Captain America is that he can't get drunk.

Personally, Captain America is one of my favorite Avengers, because the focus isn't on 'how can I defeat this villain with my super tech, cause some explosions, and still look fabulous?'

I highly reccomend this film for ispiration alone, or at least as the Marvel movie that you can't watch Avengers without. 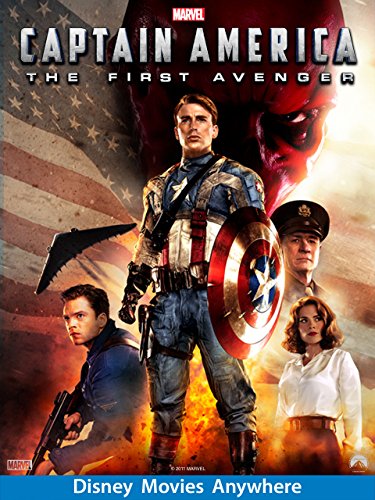