Everyone knows Mary Poppins. She's the perfectly perfect nanny who can clean a room with just a snap of her fingers, jump into chalk drawings to participate in a horse race, and knows exactly what to say when she doesn't know what to say.

But not many people know about the struggles attached to her.

"I know what he's going to do to her. She'll be cavorting, and twinkling, and careening towards a happy ending like a kamikaze!" exclaimes Mrs. P. L. Travers (Emma Thompson) in reaction to her agent's urging to allow Walt Disney (Tom Hanks) rights to bring Mary Poppins off the page and onto the silver screen. Her agent convinces her to visit Disney's film studios in hopes of reassuring her of the safety of her literary creation. The result is more of the opposite. Not only are the penguins going to be animated, and Bert will be displayed by Dick Van Dyke of all people, but Disney's writers have completely destroyed the heart of the story: Mr. Banks. Her father.

This is a story of grief, love, joy and forgiveness, which while not for children, is much needed in today's atmosphere. This is also a story of maturity. Mrs. Travers accuses Walt Disney as being immature and insensitive to the real world, with his cartoons and amusement parks, while she is blunt and scathingly honest in manners and perception of everything and everyone she encounters. So who is right? And not only is the conflict between two storytellers, but inside Travers herself. The memories of her childhood against what she is trying to achieve, the memories of her father's kind words against his bouts of rage, the hope of her childhood against her critiscm of life.

This is also a story about parents, particularly fathers. Neither Disney or Travers' fathers were perfect, and at times abusive, but both were much loved, and Mr. Banks is the reflection of that.

We learn about how much Mary Poppins meant to people when she appeared in print, children and adults alike, and why.

Travers encourages the father of a handicapped girl with a list of genuises and the words: "They had problems too." That same man is there for her in her hardest times, without her having to ask.

Travers saves her mother from a suicide attempt.

During a visit to Disneyland, Walt takes a moment to sign papers for fans and encourages them to get Travers' as well.

A major plot point is Travers' father's alchoholicism. We see him drinking regularly, and once drunk in public.

Language is moderate, along with the quip: "If I believed in hell, I'd be sitting in it's waiting room!"

There are Buddhist images and statues in Travers' house.

When a hotel footman asks if he can help Mrs. Travers unpack, she tells him to find a different job if he wants to touch women's undergarments.

Travers uses a lot of medication (we aren't told why).

Result: A much-appreciated tear-jerker. Watch if you dare. And listen. 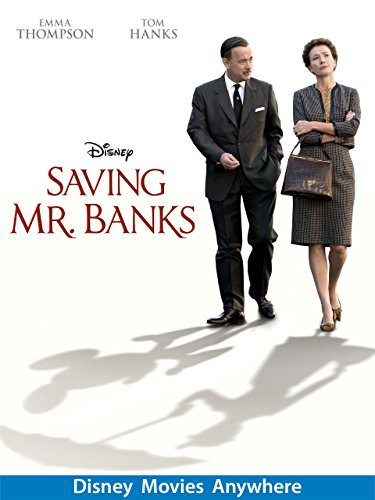 "We all have our sad tales, but don't you want to finish the story?"