I secretly like to think that I was Olivia Rodrigo’s first fan. Secretly, because Rodrigo came into pop culture through Disney and her songs were largely popularized through adolescents and teenage girls who, by all accounts, have no idea what “real” music is.  Five years ago, at the age of 12, the young, hopeful singer landed her first Hollywood gig as a lead on the show Bizaardvark, a mediocre Disney channel show enjoyed most by the Tween set. Three years later, the pop star landed her next role on another hit Disney Channel show, High School Musical The Musical The Series, a mockumentary-style show that follows the on and off-stage drama as the student body of East High puts on a production of High School Musical. In this mindless therapeutic escape into a world where life's biggest problems had to do with a high school production, she played a somewhat boring and average character. But when the writers discovered the young actress was also a talented songwriter, they encouraged her to write some original songs for the series. From there, Rodrigo was able to create her first hit single.

Still written and sung for Disney, her 2019 hit single “All I want” is about betrayal. Although it reflects a fictional life of characters on the show, the emotion was too deep and impassioned not to be real. With lyrics as dynamic and forceful as, “And I won't fight for love if you won't meet me halfway” and “Does he think that I'm the kinda girl who needs to be saved?” one can’t help but wonder who hurt her. For the Disney audience, Rodrigo played it safe in the comfort of her soprano range. There was a lack of maturity in her music, but it was still very beautiful, and it hit the mark for its intended audience.

Only two years following her first debut song, a new Rodrigo emerged. Her social life drastically became visible and fascinating to the public eye. Scandal with co-star Joshua Bassett caused more than just Disney followers to start to recognize Rodrigo. After rumors that Bassett cheated on Rodrigo with fellow Disney star Sabrina Carpenter, the world, following closely through social media, became intrigued. The dust was beginning to settle when Rodrigo broke the internet with her number one chart topping single, “drivers license.” The internet reacted dramatically to the song and the scandal was brought back to life. Through social media, she had the sympathy of teenage girls, a force to be reckoned with, and wesupported Rodrigo against Bassett. "drivers license," the signature song on her debut album “sour,” which was released in May 2021, spent eight consecutive weeks atop the Hot 100; it became the seventh single in the chart's history to have debuted at number one and spent at least its first eight weeks at the spot, and the longest running number-one debut single. In simpler words it was the song of the year.

On the surface, “drivers license” is a piano-assisted tune building a story about a 17-year-old girl getting her driver’s license. Beneath the surface, Rodrigo exposes her recent heartbreak after planning to ultimately celebrate the freedom that comes with a driver’s license with her now ex, who has moved on to another girl. Rodrigo is very descriptive in the details and doesn’t try to hide her vulnerability. With references such as “You’re probably with that blonde girl, who always made me doubt,” her anger and jealousy are out front. As the song progresses, Rodrigo’s voice builds to cathartic howls of pain, and the bridge is a lush, layered release as she reveals, “I still f-in’ love you.” What made this song so popular was not only the public story behind it, but the pain in her voice and the way she chose to express her story with honest and relatable lyrics.

In addition to her sultry voice and the melancholy music, her personal journey speaks to the coming-of-age generation. In the “driver's license” video, Rodrigo appears driving alone on a dark street past her ex-boyfriend’s house, and you can feel her disappointment and anguish – how life was not how she had planned and hoped. At the point of this song's release, the world was in the midst of a global pandemic. Today’s teens have transitioned in and out of school, from independence to quarantine and back again. Teenage girls are not just concerned with boys and break-ups – they are coming of age during an unprecedented time of solitude and confusion.  Young girls, already questioning their self-worth from the tugs of social media, and further imprisoned in their homes from the pandemic, can too starkly imagine the isolation of driving alone down that haunted street yearning for better times.

The other tracks on the album elaborate on this theme of heartbreak and self-doubt. Rodrigo’s insecurity is revealed in the album’s first track, “Brutal,” where she refers to herself as “not cool” and “not smart.” Self-doubt and inadequacy are peppered throughout other tracks as well, such as in “enough for you,” in which she says, “And you left me there cryin’, wondering what I did wrong.” In “jealousy jealousy,” she goes further, taking a stab not just at her ex, but more generally at society’s obsession with beauty, and the way social media can fabricate ideals that are unattainable. She laments “Com-comparison is killin’ me slowly. I think I think too much ‘bout kids who don’t know me.” She speaks for a generation of “digital natives” born into a world of technology, where social media can compound feelings of isolation and depression and can lead to mental health challenges.

Yet she is not without her critics. Some may see the collection of songs on “sour” as generic tunes accompanied by a basic pop beat in the background.  Indeed, fans clamored to notice elements taken from other artists, such as similarities between Rodrigo’s smash hit “Good For You” and Paramore's 2007 single "Misery Business." Similarities were supported by a mashup of the songs, which has since been viewed more than 3 million times on YouTube, and Rodrigo ended up giving songwriting credit to the artists she took inspiration from for her own record.

But despite some typical themes and somewhat basic tunes with easy chords and hooks, the album is nonetheless empowering and inspires young girls to be independent and unapologetically themselves. Rodrigo’s honest exploration of vulnerability, insecurity, and heartbreak resonates deeply with today’s teens. Although this may sound like the recycled clichés proposed from earlier music and movies about what it is like to be a teen, her lyrics speak more profoundly to today’s teens in today’s unprecedented times. In a time of a nation’s reckoning with race and gender identity, for example, being yourself has a meaning different from empowering pop songs from previous generations. This is the perfect album to blast in the private sanctuary of the bedroom belting out the lyrics along with Rodrigo, maybe feeling a little less alone and like no one understands you, which after all, is the quintessential teenage experience. Rodrigo’s music is as authentic as it is relatable, accompanied by her raw reverb underneath her vocals to make her music sound like it’s being performed live. To those who may cringe at this pop album made by a Disney pop star, ignore today’s teen girls and their role models at your peril. Teenage girls develop the contours of pop music, just as they shape fashion and set trends. “Sour” is our anthem. Today you may see a clichéd girl jumping on her bed dancing to pop music, but tomorrow that same girl will be a young woman marching in the streets feeling strong, empowered, and inspired by the raw message this artist has presented. 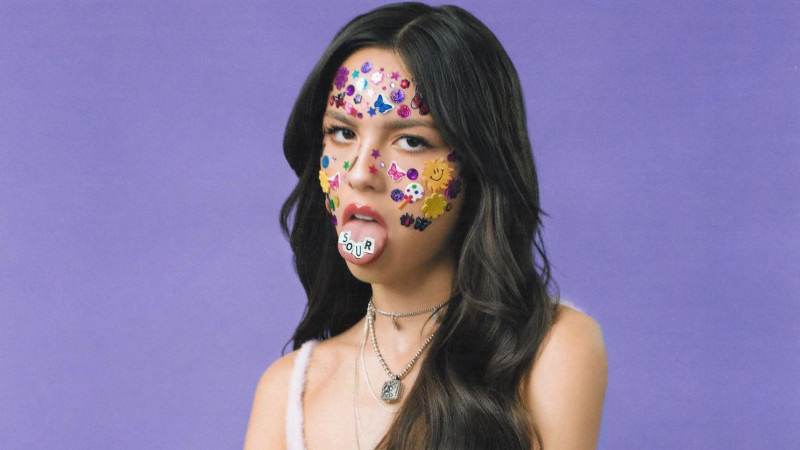 I am 16 years old, almost the same age as Olivia Rodrigo. I was in 9th grade when the pandemic hit. I was just on the verge of gaining independence as a young teenager, when we all became imprisoned in our homes with just our families and social media. Rodrigo's new album spoke to me as I was learning to navigate this strange new world. My music review is personal for me, as it reflects how my generation is coming of age in today's world.