Favorite Quote:
It's not a bad life, it's just a bad day

When someone says the name Harry Styles, people are either confused, start singing “Watermelon Sugar” in their head, or think about the boy with the long hair in One Direction. However, there is much more to the artist. His debut album, Harry Styles, was not a huge radio success, as it was not created with radio in mind. That being said, “Sign of the Times” quickly rose to popularity and is ranked 428 on Rolling Stone’s “The 500 Greatest Songs of All Time.” His self-titled debut album is much more of a folksy, classic rock inspired album versus his sophomore album: Fine Line. Fine Line is heavily influenced by Joni Mitchell's, Blue, which is apparent in many songs, especially “Canyon Moon.” Fine Line had much more radio success than his debut album with the singles: “Watermelon Sugar,” “Adore You,” “Lights Up,” “Golden,” and “Treat People with Kindness.”

Harry Styles began his career on the popular UK singing competition X-Factor. He auditioned as a solo artist at sixteen years old in 2010. He received a yes from Simon Cowell and Nicole Scherzinger, however, Louis Walsh said no. Despite that, he proceeded to bootcamp. After bootcamp, he was cut. However, at the last minute Simon Cowell decided to put him in a group with 4 other boys who were cut: Louis Tomlinson, Niall Horan, Zayn Malik, and Liam Payne. From there was born the global sensation that became One Direction. The 5 of them made it to the semi finals of the show and came in 3rd place. However, it was clear that One Direction was not going to end with their time on the show. One Direction went on to produce 5 albums: Up All Night (2011), Take Me Home (2012), Midnight Memories (2013),  Four (2014), and Made in the A.M. (2015). They also went on 4 highly successful tours, 1 being an arena tour and 2 being stadium tours: Up All Night Tour (2011-2012), Take Me Home Tour (2013), Where We Are Tour (2014), and the On The Road Again Tour (2015). The band went on hiatus in August of 2015 and each member since has put out their own solo project, including Harry.

Harry Styles was released on May 12, 2017. The lead single and Harry’s first solo song was “Sign of the Times” which was released on April 7, 2017. While “Sign of the Times” peaked at number 4 on the Billboard charts in 2017, the rest of the album was not as big on radio. He himself understood that the album was not made for radio. That being said, the album debut at #1 in 84 countries. The album begins with “Meet Me in the Hallway,” a slow, psychedelic pop, folky, and beautiful song, seemingly inspired by The Rolling Stones. It is followed by “Sign of the Times,” a seven minute piano pop rock ballad that is absolutely stunning. It features a choir that gives the song life. “Carolina” is next, which is an upbeat, Britpop, rocker with a lively melody. “Two Ghosts” follows it, a soft rock ballad written while Styles was still in One Direction for their album Made in the A.M. It is relatively slow, imbued with intense imagery, and accompanied by an acoustic guitar, minimal electric guitar, and a consistent drum beat. After that is “Sweet Creature,” a folky love song, allegedly inspired by Shakespear’s Othello. Featuring only an acoustic guitar, it is delicate and sweet and aligns with the subject matter. On the B side of the album (the second half of the album or second side of a vinyl record), the tone switches quickly with “Only Angel,” having a vibrant and upbeat glam-rock inspired melody and sound heavily inspired by The Rolling Stones. Fan favorite “Kiwi” follows next. The biggest and loudest song on the album has a David Bowie type of feel and is an extremely upbeat hard rock song. With another shift in tone, “Ever Since New York” is after; another folk, rock troubadour song. “Woman” follows and is very reminiscent of “Bennie and the Jets” by Elton John. It is perky and upbeat and is funk inspired rock, and those duck noises you hear are actually a distorted Styles himself. The album ends with “From the Dining Table,” a slow and sad melodic acoustic pop song. It features his voice, an acoustic guitar, and string instruments.

Personally, my favorite song from this album is “From the Dining Table.” I find it absolutely stunning and comforting. The lyrics are simple, yet beautiful and powering. For example, “comfortable silence is so overrated” is a lyric that left me dumbfounded from the first time I heard it. So minimalistic and short, but mighty. Another favorite of mine is “Kiwi.” Nothing will ever beat hearing this song live as the ground of Madison Square Garden was quite literally shaking beneath my feet.

Fine Line was released on December 13, 2019. The lead single was “Lights Up,” released on October 11, which peaked at #19 on the Billboard charts. Throughout this era, Styles and his team went all out on their promotion campaigns. Prior to the release of “Lights Up,” the website doyouknowwhoyouare.com/ popped up—alluding to the lyric “lights up do you know who you are” in the song. The next single to be released was “Adore You” which peaked at #6 on the Billboard charts. This promo campaign was shortlisted for the Cannes Lions 2021 Awards, which celebrates creativity and originality in advertising and artistic production. For this campaign, Styles created the island of Eroda, Adore spelled backwards. With relatively no tie to Styles, the campaign and website of Eroda (visiteroda.com/) sent fans of all different bases to go crazy. With a twitter (twitter.com/visiteroda), Instagram, and Facebook account, this alternate universe became a reality. The extended version of the music video, directed by Dave Meyers, is a short film which takes place on the island of Eroda. The next single was “Falling,” followed by “Watermelon Sugar,” which he won his first Grammy for Pop Solo Performance at 2021 Grammy Awards and peaked at #1 on the Billboard charts,—his first ever #1 as a solo artist—“Golden,” and “Treat People With Kindness.” Fine Line begins with “Golden,” an upbeat seventies inspired SoCal soft rock song. Featuring darker lyrics like: “I don’t wanna be alone,” that are masked by the happy melody. The second track is “Watermelon Sugar,” another seventies pop soft rock inspired song, featuring horns that complete the song. The third track is “Adore You,” the most pop inspired song on the album and is very much about the preliminary stages of a relationship. The fourth track is “Lights Up,” an alternative pop song all about self discovery. Track five is “Cherry,” a folk acoustic pop song; this is one of the sadder songs on the album, confronting the idea of jealousy. “Falling” is track six, another sad pop piano ballad about confronting the idea of not liking who you may be becoming. The seventh track is “To Be So Lonely,” composed on a guitalele,—a ukulele with six strings—and is a precious, alternative folksy song. Track eight is “She,” a slow blues rock song that is a personal favorite for Styles. “Sunflower Vol. 6” is track number nine which is a psychedelic pop song that is endearing. Track ten is “Canyon Moon” which is heavily influenced and inspired by Joni Mithchell’s Blue. Styles even tracked down the maker of Mitchell’s dulcimer—a fretted string instrument—Joellen Lapidus. He bought one for himself and included it in this track. The second to last song on the album is “Treat People With Kindness,” a psychedelic rock song. Styles wrote this song after expressing interest in writing a song about his slogan Ttreat People with Kindness.” It is extremely unique among the other songs he has written. The last song on the album is the title track “Fine Line.” “Fine Line” is an indie folk ballad that starts off quiet and soft and gradually grows with horns and strings. As one of the most powerful tracks Styles has ever written, it has won over the hearts of fans, including myself.

Personally, my favorite song from this album is “Fine Line,” and it just might be one of the best of all time, in my opinion. It has been my most played song of the year for the past two years in a row. Nothing will ever surpass the experience of hearing it live for the first time in Madison Square Garden. I am just as obsessed with “Canyon Moon,” as I too have a strong liking for Joni Mitchell, especially Blue.

The term, never judge a book by its cover, applies to many aspects of life, and most definitely Harry Styles himself. At first thought, some may be stuck with the boy band image of Styles, which is not a bad thing. However, it is clear that the artist has surpassed this title, cementing himself as a force to truly be reckoned with. 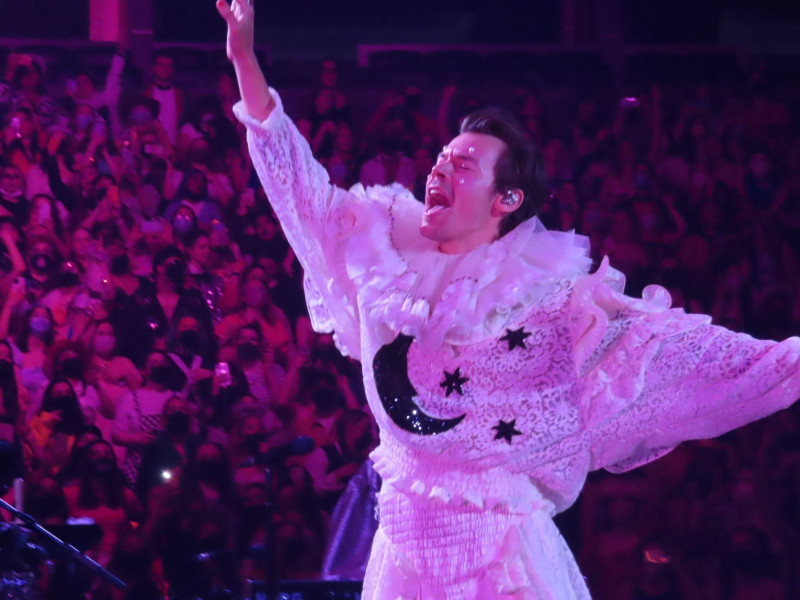 I am an avid music lover and fan. I have grown up with the music from the 1960s, 1970s, and 1980s playing throughout the house. I listen to music all the time. I love making playlists and sharing songs that I love with my friends and family. Harry Styles has ended up becoming one of my favorite artists.