Patching Up The Musical Quilt

If OutKast's "Aquemini" album made hip-hop sound funny in the 90s, Gym Class Heroes' "The Quilt" completely made the same effect in 2008. When I first heard "Cupid's Chokehold" I almost screamed out "Ewww!" When I looked in the Arts and Leisure section of The New York Times, it read that Gym Class Heroes came out with a new album. I took one look at Travis McCoy's clothing and literally jumped out of my socks. But I'm a tolerant person. So one month later, I bought "The Quilt" on iTunes. "Peace Sign/Index Down" gave me the impression L'il Travvy wasn't thinking straight at that time. "Look ma, no hands/ Your little boy's a man/ Everything that you said is finally setting in/ Trainig wheels fell off and I kept peddling/ And now I'm riding wheelies on this industry/ Say the word and I'll ghostride this instantly/ Good looking pop all the strength that you're giving me/ If it weren't for you gym class would be history" And I was like, whoa, slow down! Crazy excellent song in my book, ladies and gentlemen. "Cookie Jar" and "Kissin' Ears" both feature The-Dream's scratchy falsetto on the chorus. Hmmm... The Prince of Silliness and The Duke of Dischord together for a bangin' time. Masterpieces all of them and nothing less. "Cookie Jar" is certainly, delectable (no pun intended). "Live A Little" gave us a glimpse of the reason why Gym Class Heroes is a multi-genre band. These lyrics are not hip-hoppy at all. They are emo, emo, EMO! I request hip-hop, not rock. Aargh, what is wrong with hip-hoppers thinking they can "rock the house" these days? But what better way to jumpstart an album than with a reggae song. Believe it or not, Sir Travis put a horny ska-driven track entitled "Blinded By The Sun", which follows a journey of a man wondering if he is his girlfriend's only lover. At the end of the song, it turns out his girlfriend was two-timing him. Blinded by lies, therefore blinded by the sun. This, along with "Cookie Jar" were used for remixing on the iTunes version, featuring a rapper who calls himself Stressed Out. The high reediness of his voice backed up against Travis McCoy's mouth makes a dent upon the musical world. If you liked Gorillaz, Gym Class Heroes are next in the alphabet and up on your playlist. 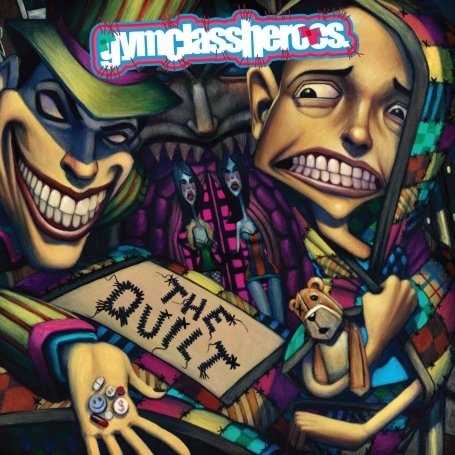 
Buy from Amazon Available on iTunes
The author's comments:
I'm extremely random in all ways possible. If you want to check out more musical reviews on today's awesome music check out my blog at www.theworldofjman.blogspot.com
Post a comment
Submit your own