It Won't Be Soon Before Long | Teen Ink

It Won't Be Soon Before Long

It Won't Be Soon Before Long has really expressed Maroon 5's true talent. Their album, released in 2007, revolves around the idea of a break-up. The album carries us through the regrets of leaving a woman and having to move on with it. Although the album is about a break-up, the songs are upbeat and feature melodic surprises along the way.

Adam Levine, James Valentine, Jesse Carmichael, Michael Madden, and Matt Flynn have all blended their talents to perform the most entertaining tracks. I don't find any of the songs a bore to listen to and they are all unique. The choruses of their songs are catchy and their lyrics are easy to remember so anyone can sing along at ease.

Their tracks are well named with titles that suit the content of the song. The album title insists on the fact that breaking up is hard to do and that you must wait for the right moment. Maroon 5 keeps in mind that we can relate to their songs from previous experiences. They give focused performances but make sure not to release a dull and lifeless album.

The album is worth every song and it features songs that do, indeed, cheer you up. If you're looking for a great pop-rock album, make sure to check out Maroon 5's, It Won't Be Soon Before Long. 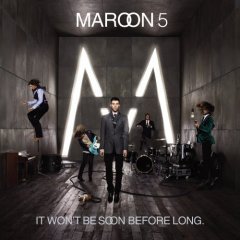