Rating: 10/10
The game Resident Evil 4 is like every other Resident Evil game. It is about Zombie killing. When you start this game you get a handgun, first aid spray, and handgun bullet. The first aids spray is to recover your Health Points (HP) when you're low on them. (Tip to players: To pass the game without getting killed at every level you combine Red Herbs, Yellow Herbs, and Green Herbs at the very beginning of the game. What this does is raises your max HP bars little by little so you'll have more HP so you won't die as often. A little tip for you cheaters out there - throughout the game you can die with infinite health which makes it better, but back to the topic...) You first start off in the woods near a cabin. Leon, the main character in the game, is being controlled by you and what you must do is save a young girl named Ashley, the president's daughter. The infected people are looking for her to kill her so you must kill many zombies in this game. The hardest parts of this game are the Chainsaw and bosses. Other than that, if you can headshot zombies and have the knowledge to combine your 3 types of herbs together then you won't have a tough time throughout the game.
Here's a little background on Leon; he was a cop working for R.P.D when suddenly the virus got to Raccoon City and zombies started to kill everyone. Leon and his friends managed to escape and then worked for the president. Leon was told to save the president's daughter, a 20 year old female named Ashley. As Leon tries to save Ashley he encounters a bunch of people infected with a virus that makes the zombies controllable. He meets more people such as Ada Wong, and Luis Sereta that are trying to kill those controllable zombies. As Leon first meets Luis, a zombie boss called The Big Cheese (Weird name if you ask me >.>) starts to piss Leon off and tries to kill him. The Big Cheese starts to speak about Leon carrying the same blood as the zombies which means he is immune to the virus. Later on the game you're able to purchase weapons, inventory space and maps, and heal items, and you have to fight tougher enemies. I recommend that you save a rocket launcher before every boss fight; most of the time you can 1 hit them.
This game has many cut scenes that require you to press buttons, to dodge, or block, so stay focused. Oh, and at the beginning of the game save the wolf in the bear trap because once you fight the giant, the wolf will distract the boss while you kill him and that is an easy boss fight. Once you finish the game you will have to start a new game. Think that's bad, huh? No, it isn't because you get many new things to use while doing it all over. You get Separate Ways, NEW weapons, NEW clothes for the players, Mercenaries Mode, and Ada The Spy Mode. Separate Ways is a mode where you use Ada Wong and complete her missions. Ada the Spy mode is where you find 5 of the Plaga samples and take it back to the checkpoints. The Plaga is the virus that makes people into controllable zombies. But to learn more about these you will have to play the game. This is one of the greatest games I have ever played. Play it -you'll love it! 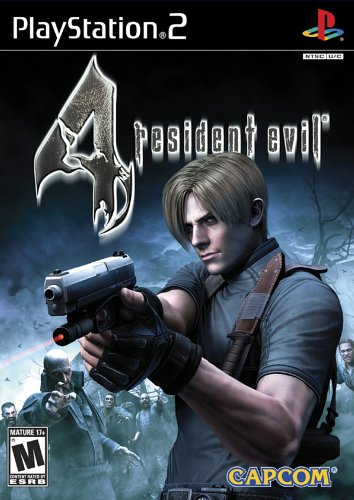 Favorite Quote:
~Its not how deep you fish~
~Its the motion of the ocean~