Even after 25 years, the answer to that question is still the same. Who you gonna call? Ghostbusters! It took 25 years, and several months after that to find a publisher, but Activision answered the call and finally made the inevitable happen. The Ghostbusters have gone digital and have gotten their own videogame!


Even though I'm an invisible man, writing this from my couch in my air-conditioned living room, I know exactly what you are thinking at this point in the review: “What the freak?! How good could a Ghostbusters game really be, realistically?” Actually, realistically, it can be really, really good. The first thing this game does right is what should've been the very first thought in pre-production. All of the original cast of Ghostbusters from the 1984 classic film have graciously lent their considerable talents to the cause. That means that you, the gamer, are guaranteed the same non-stop, rapid-fire wit that you remember from the movie. This is awesome! There aren't too many things in this world funnier than seeing Bill Murry and Dan Akroid argue about how a giant marshmallow man has been unleashed upon New York City and how they should stop it. Speaking of which, it struck me odd that Stay Puft is featured as a boss in this game when the game is supposed to take place a few years after Ghostbusters II, but more on that later.


I'm not gonna sugarcoat it, I'm just gonna come out and say it; this is a linear game. I know many of you are heart-broken but please, let me explain. With a game like this, you almost have to take the linear approach. Take, for example, one of the many Scooby-Doo games that have been made. The games feature several mysteries for you to solve, one at a time, with a chance to explore the often times huge environments, but not much else. This approach to game development, although not popular, is effective and gets the job done. It gets the job done here, too, but not without some trouble.

You are the main character in this game, playing the part of a new recruit. As the rookie, you get to do what the rookies do best: all of the stuff the old guys can't anymore which, admittedly in this game, is just about everything. While you are playing through, you get the sense that the other guys are pretty useless. Not to say they aren't doing anything, I mean, they help lure the ghosts towards the trap and they will revive you if you fall in combat and they'll even tell you when you are in danger but, not much else. Also, it gets pretty awkward when you are walking down an empty hallway and, like in any linear game, you have find an invisible switch or wait for the other characters to spring it to move the gameplay forward. This results in an almost complete halt of the gameplay, which was pretty depressing at times.

The gear you get is pretty cool. You have your P.K.E. meter used to find traces of ectoplasmic residue, the slime gun used to subdue those trickier ghosts and, of course, your trusty, and still not street-legal, Proton Ray. This behemoth of a weapon that is strapped to your back will be your best friend when trapping those pesky ghosts; often times you will need to use the ray to slam ghosts up against anything you can to wear them down. This becomes apparent very soon, as you are almost immediately given the task of tracking down your old friend Slimer. Which leads me to the bosses; they are pretty massive. From Stay Puft, to a sewer monster; from a creepy spider-lady to a monster made of library books, Ghostbusters redeems itself the best way any game can, by providing some of the most memorable boss battles ever. As you can expect, battling these beasts in an almost fully destructible environment doesn't leave much chance for a clean getaway - sorry about that. What is does leave a chance for is a dock on you pay in order to cover for damages to the job site. This becomes especially important when you are creeping in between the book shelves in the library and you see a ghost and try to blast it, only to miss and hit the books and such behind it. I don't really have a good or bad opinion on this feature. If anything, it makes the gameplay that much more challenging - which is a good thing.


All in all, my only complaint for the Next Gen consoles (PS3 and Xbox 360) is that the flow of the action is too often halted by the linear gameplay. Once again, linear gameplay isn't the worst thing in the world, it's just that if it isn't done right, it doesn't really work out. As for the Wii, the same thing happened to this game that has happened to most third-party Wii games. So much time and effort went into the PS3 and 360 versions that the Wii was almost over-looked. This doesn't make the Wii version less fun; actually, waving the Wiimote around like an actual Proton Ray was a blast. Other than all of that, this is a very solid game. If you are a movie buff like me, and you all but worship the original movie (and Ghostbusters II for that matter) then you will get this game for no other reason than to hear the witty banter of the original cast. If not, then the game is a must-rent at least. Just remember, if I see any of you on the street, ask “Who you gonna call?” and you look at me like I just asked you a trick question, I'll puff out my chest and say, “Ghostbusters!” And then I just might smack you upside the head.
3/5 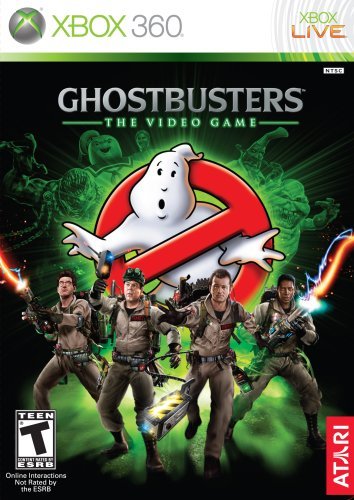 Favorite Quote:
"I'm the girl who will burst out laughing in dead silence because of what happened yesterday"
"War.. War never changes"
"Insanity is just another part of my personality"
"Hey look! It's Gordon Freeman!"

For my money this is one of my favorite games, and I also am a massive fan, but I think the real turn-off was the multitude of glitches.

Multiplayer is a fun addition, but it freezes (not too often), slows down often, and some of the achievments/trophies are broken, meaning you can't unlock them unless you hack the game (don't hack, kids).

Ultimately, though, it's the probably the best Ghostbusters game ever made.  And I can't help but go back and play it again.