For many years we've gotten more and more open world shooters. In late 2014 we had FarCry 4, continuing the well known franchise. In 2008 Fallout 3 was released and in 2010 Fallout:New Vegas was released. But amid all of those there was one very unique game. Now it's a series and it is very popular. Borderlands. Not the first one or the pre-sequel. Borderlands 2 was my personal favorite as it had wasn't the same as the others. Personally I thought Borderlands: The Pre-Sequel was terrible. Its gameplay made the series very repetitive. Each game had the same kind of classes and each had random weapons that seemed like reskins of others. Anyways. Borderlands 2.

Borderlands 2 featured a completely different map and new enemies. The map is big, but it's separated into smaller maps. This is actually good. If we didn't have this it would be as fun. When you enter an area for the first time you don't know what to expect. There's also lots of new and old characters. There's all four of the original characters and ClapTrap. One of the new ones is Handsome Jack who is the main antagonist of the game. Don't expect to see very many ClapTraps; only one is alive.

The new enemies also make the game way better. There aren't only Skags and Bandits everywhere you go. There are still a lot of bandits but there are also Bullymongs in the snowy areas, bandits EVERYWHERE, and now the bandits have helicopters and vehicles they can drive in. If you want some XP go to the Dust with a vehicle and fight other bandits in cars.

Now if you've ever read one of my reviews you would know I usually talk about the story. Well here it is. Borderlands 2 takes place a couple years after the first game. During these years Hyperion has wanted to "cleanse" the planet of all evil, which is basically the entire planet. While he's doing this he's also looking for the recently discovered vault. He's also mining Uranium from the old vault. So he sends his robot army to kill everyone on the planet. You must find the vault, kill Handsome Jack and make sure not everyone dies.

Now that you know the story let me mention some more things. The beginning of the game was way better than the first one. It actually made sense and it was more fun. I should also mention ClapTrap is a way better character.

The overall is way better than the first and third installment in the series. The Pre-Sequel was changed to much with gravity and stuff while the first one was good just not amazing. I will say the DLC was good. 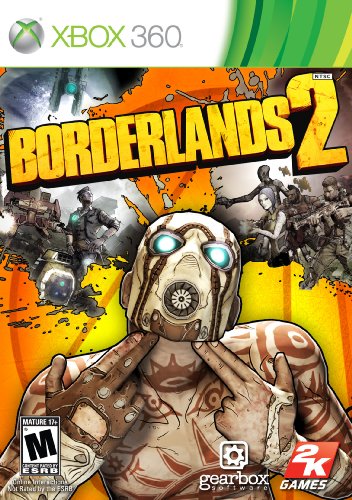