The solitary tree stood at the edge of a meadow, crooked and bent from years of weathering. It was far from any type of civilization – few people even knew about it. But they had decided to meet there. Together they had forged through the foliage until they reached the tree. It had become their haven.
Meticulously he carved their initials into the tree’s dark, uneven bark. They will last forever he had said, just as our love will. She nodded, agreeing. For days they met at that old tree at three o’clock to escape into their own little heaven of love. For hours they would lie in the tree’s cool shade talking of nothing but their future together.
As the months past and winter settled in, the trips to the tree got less and less frequent. But their love continued to blossom. When, at last, the final snow melted, they made their return to the tree. Their initials, still engraved in the tree’s exterior, had faded from the weather. But their trips to the tree began to start up regularly.
One day as they were making their way through the now-familiar forest to the meadow with the tree, they head a sound. It wasn’t the usual bird-chirping or leave-swashing sounds that the forest had always emitted. These were new. Sounds of men shouting and machinery filled the usually quiet and peaceful air. The couple rushed to the edge of the woods to see what the commotion was about.
The crooked old tree that they had spent so many lazy afternoons under was gone. The girl immediately started crying, and nothing the man said could make her stop. But our tree is gone, she cried, all our memories are gone. Finally, he led her back through the forest and to their waiting car. They returned home, but the girl was too upset to do anything but wallow in her grief. Finally, unable to see her suffer anymore, the man returned to the forest later that night.
Flashlight in hand he made his way through the dense foliage. When he reached the clearing he shone the faint beam of his light over a pile of broken wood pieces. An hour of digging gave him no result. Just as he was about to give up, his light flashed across a particular piece of wood. Wedged underneath two immense pieces, was the small chuck with the initials that he had carved so long ago.
It’s been five years now since they chopped down that old tree. They’re married now, with a precious baby girl. Although they never go back to that meadow, they’ve planted their own oak tree in their backyard. It’s still thin and scrawny, but someday it’ll grow to be as massive as the one where they spent so many afternoons. And up on top of their mantel sits that little chuck of wood. It’s dark and dead now but it still contains four initials inside a heart. 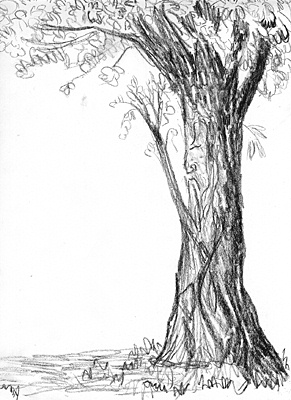