Favorite Quote:
"If you cannot do great things do small things in a great way." - Napoleon Hill

Have you ever wondered what it would be like to remember all that you’ve ever experienced, in almost perfect detail? Wouldn’t it be amazing to be able to remember everything your teacher went over during class, or what it was like being an infant?

This is the astonishing reality for those living with hyperthymesia, but it’s not always as “bright and sunny” as it may seem.

Hyperthymesia, also known as Highly Superior Autobiographical Memory (HSAM), is a neurological syndrome that is characterized by a person’s ability to recall every event in their life in almost impeccable detail. It is extremely rare, as only 61 people in the world are known to have it.

Individuals who have this extraordinary memory are identified through two criteria: 1) they spend much of their time thinking about their past, and 2) they have the phenomenal ability to recall previous events. When asked about a specific date 10 years, these people with HSAM can tell you what day of the week it was, what they were wearing, what the weather was like, and any significant events that happened in the news with 97% accuracy.

Those with hyperthymesia are different from others who have advanced memories. People who win memory competitions, for example, have to put effort into remembering. They often utilize memory techniques such as mnemonics to successfully encode and recall information. Those with hyperthymesia, on the other hand, have a memory that works automatically and does not require conscious effort to form their highly-specific memories.

When was it discovered?

Hyperthymesia was discovered in 2006, by a team of researchers from the University of California, Irvine. These researchers were presented with the case of a woman called AJ, later identified as Jill Price, who demonstrated the ability to recall a seemingly-impossible number of personal events. By studying Jill Price and other individuals who were later identified to also have hyperthymesia, researchers were able to learn more about the syndrome.

Do hyperthymesiacs have special brains?

Researchers from the University of California Irvine found that those with hyperthymesia had differing brain and mental processing from average people. Their study found that hyperthymesiacs had variations in nine different structures of their brains, most of which were in areas known to be linked to autobiographical memory.

Further research needs to be performed in order to determine the precise roles of these differences in the development of the syndrome. Some researchers believe that the brains of hyperthymesiacs are the key to finding a cure for Alzheimer’s disease.

Take it from HK, a hyperthymesiac interviewed by the National Institute of Health.

According to HK, dates and events just “come into” his mind. “I remember everything that happens during my day. All of it is easy to remember. I feel like I am a walking computer sometimes. The information just gets stored in my brain. It can get distracting but I can let it go too.”

When asked about whether he thinks about his memories a lot, he responded with, “Well, I think about them quite a bit. Especially if it is something that affects me. A lot of times, when someone mentions something to me, it triggers a memory. I like telling my grandmother what certain anniversaries are. Like I’ll think about what we did 5 years ago. You know, she also takes me to appointments so that I can help her remember stuff too.”

As incredible as it may seem, hyperthymesia has its downsides. It is linked with OCD behaviors, and has been known to consume the individuals who have it. Jill Price suffers major disruption in her daily life. She states, “As I grew up and more and more memories were stored in my brain, more and more of them flashed through my mind in this endless barrage, and I became a prisoner to my memory… Learning how to manage a life in the present with so much of the past continually replaying itself in my mind has been quite a challenge, often a debilitating one. I have struggled through many difficult episodes of being emotionally overwhelmed by my memory through the course of my life.”

Price hopes that her brain will help solve the “riddles of the tragic disorders of memory loss” and that her story will inspire others. “For now, I hope that my story is illuminating and thought provoking for readers; and helps explain the role of memory in all of our lives — as well as that of forgetting — and how our memories to such a significant degree make us who we are.”

Ally, Brandon A, et al. “A Case of Hyperthymesia: Rethinking the Role of the Amygdala in Autobiographical Memory.” Neurocase, U.S. National Library of Medicine, Apr. 2013. 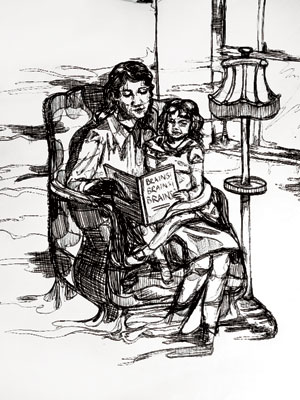