The Man With the Shell | TeenInk

The Man With the Shell MAG

Nine years ago around Christmas, I was on a Captiva Island beach at sunrise. It was the kind of sunrise when the sky slowly fades to light and you don’t notice until it has actually happened. I was there, five years old, and crouched low, scraping my fingers through the sand. I was immersed with the false hope of finding a treasure larger than the tiny shell fragments that littered the shore.

A man jogged along the waves in my direction. When he came near me, he slowed to a walk. I didn’t notice him until he was almost standing over me. Too young to be shy of strangers, I pushed myself up from the ground. It was then that I saw what he was holding in his hands. There, perfectly intact, was a beautiful cream-colored conch shell, glowing a pale orange from its small cavern. He smiled as I stared in amazement, and then, to my shock, handed it to me. I held it before me like a diamond, not believing my eyes. How did he know?

"I think this one has your name on it," he said, and then continued his run down the beach.

I do not remember his voice, his clothes or even his face, but I do still have the seashell, and the greatest lesson I’ve ever learned. The whole flight home I held it in my hand as I thought about his act of kindness. Now the shell sits on my bedside table, not as bright and big as it was, because a lot of things have changed, but it is still there, a quiet reminder that there is goodness in the world.

You see, that man saved me. He saved my belief in the kindness of people, he saved my belief that one can find what means something in life. I could focus on the bad things that have happened to me: the day I found out my dad had cancer, or the day we returned home to find our windows smashed and house robbed. Those moments define me as much as the good, but that’s not what the man with the shell taught me.

I see my shell every day, and every time I know that I can get through that day because no matter what, there are good things in my life. In the end, all that we have is what we have done for others. The shell is important to me, as important as another man who returned to the plane to give me my lost jacket, as important as the little girl who asked me to dance on the subway train, as important as me giving my stuffed animal to my neighbor who was moving.

In such a cold and cynical world, kindness matters. I know that making a difference in someone’s life, no matter how big or small, is what truly matters, and that is worth all the treasure in the world. 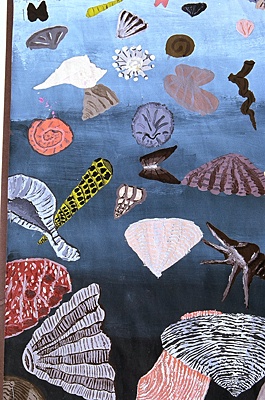