Favorite Quote:
"If you cannot do great things do small things in a great way." - Napoleon Hill

If you’ve seen the television show The Good Doctor, you’re probably familiar with Dr. Shaun Murphy, the young resident and medical genius. His uncanny ability to visualize the inner workings of the body is unique to an uncommon condition known as Savant Syndrome.

The syndrome is an extremely rare condition in which a person with a mental disability possesses an extraordinary artistic, musical, visual-spacial, calculation, or calender-calculation skill. This exceptional condition often becomes apparent at childhood, and can either be congenital (present at birth) or acquired throughout adult life.

Who is affected by savant syndrome?

Savant syndrome affects only 1 in a million people, and it is thought that only a few hundred savants are currently living. Approximately 1 in 10 of those with Autism Spectrum Disorder (ASD) show savant abilities to some extent. In fact, nearly 50% of those with savant syndrome have an ASD, while the remaining half have some sort of central nervous system disorder. Interestingly, there are nearly 6 times as many males as females with savant syndrome.

Why are more males affected than females?

Abnormalities of the left hemisphere occur much more often in males. As the left hemisphere develops much later than the right hemisphere, it is more susceptible to prenatal influences for a longer time frame, such as circulating testosterone which can slow the growth of the left hemisphere. Damage to this part of the brain is associated with savants, autism, dyslexia, delayed speech, stuttering, and hyperactivity, and thus males are more likely to have or develop the syndrome.

Why does this condition occur?

In short: it is unknown. Several theories exist concerning the origins of savant syndrome, but are contradictory. The most popular one, however, is that the damage to the left hemisphere coupled with the overcompensation of the right hemisphere contributes to the exceptional skills characteristic of the condition.

What are some case studies of savants?

Arguably the most famous savant was Kim Peek, who was known for having multiple savant abilities rather than just one as “normal” savants typically possess. He was able to read both pages of a book at the same time; one eye reading each page. Peek retained 98% of the information in the thousands of books he read, and also possessed superior calendar-calculating abilities.

Another well-known autistic savant is Derek Paravinci, a blind savant with the piano capabilities of a prodigy. He learned a great number of complicated pieces at age 4, and now is able to replay songs after hearing them only once.

Alonzo Clemons, an acquired savant who suffered from a severe brain injury that left him with a developmental disability, possesses the distinctive ability to sculpt hyper-realistic figures of animals after only viewing them for a mere seconds. Most of his sculptures are completed within an hour, speaking to his astounding capability.

These savants along with others savants have been closely studied and have captured the interest of many researchers. Studying the brains of those with savant syndrome may hold the key to understanding the momentous potential of the human mind.

Treffert, Darold A. “The Savant Syndrome: an Extraordinary Condition. A Synopsis: Past, Present, Future.” Philosophical Transactions of the Royal Society of London. Series B, Biological Sciences, The Royal Society, 27 May 2009. 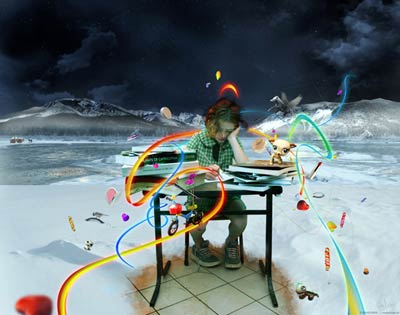