November 26 last year was the day we got out of school for Thanksgiving break. My mom is a fourth-grade teacher and had conferences that afternoon, and I had a hair appointment. I drove home after school, but when it started snowing, I left early for my appointment.

I got in the car and put on my seatbelt. I wasn't going to, since it was only a ten-minute drive, but for some reason I did. I stopped at the stop sign, then continued down the road going 35 in the 55 m.p.h. zone, with a dark truck in front of me. Three minutes later, everything went blank. I don't know what happened, and never will.

I remember the air bag exploding. Then panic set in and I was praying, "Oh, God, please save me." I started to fight to get out of the car, thinking it might blow up. A woman came to help.

"Who are you?" she asked. "Where are your parents?"

"My, uh, name is Abi Beardsley," I managed to mutter. "My dad is at work, and my mom is in conferences."

"Okay. I'm going to leave you with this man. I'm actually on my way to a conference with your mom."

The man who sat me in his truck offered me his cell phone and I called my aunt. The fact she answered was another miracle because her phone blocks unknown numbers so she wouldn't have known it was me. I told her I was in an accident.

But they shuffled me into the ambulance before I got to see my grandpa. The woman asked if I wanted to lie down. I asked her if I could sleep, but finding that wasn't allowed, I decided it would be easier to stay awake if I sat up. It was the fastest ride I'd ever had.

When we arrived at the hospital, a big man helped me out. I asked if this was the new hospital.

"Oh. I always wanted to see it, just not like this," I replied, trying to lighten the mood.

Immediately there was a nurse with me in the emergency room, and within seconds, it seemed, my mom was there with my brother and Popi. She hugged me, and we both cried really hard. When the nurse came in and asked if she could cut my jeans off so they could take x-rays, I replied, "No! No! These are my favorites. I can take them off," which I did.

"'Buddy Holly' by Weezer was on the radio," I told my brother, Pete.

"Oh, really? That's cool. Do you want anything?" he lovingly inquired.

By that time my dad had arrived, too. He hugged me and told me he loved me. So much happened, I can't remember it all.

Later, when we got in the van to go home, I sat in front, with my mom and brother in back. The only conversation I remember was Pete saying, "I love you, Ab." That will stay with me the rest of my life.

When we got home, the reality of what the doctor told me began to sink in. I should be dead? The seatbelt saved my life? I shouldn't have made it? Those are some pretty profound realizations to comprehend in one night. I decided I could sleep. It was safe now. My mom held my head all night. I doubt she slept at all.

The next day I found out that the woman who was driving the other car and her granddaughter were okay but Dina, the pregnant lady, wasn't. Her baby had died instantly, and Dina's just now beginning to walk again. I had some bruised ribs and another bruise that stretched from my calf to my thigh, but nothing else.

I was cited for vehicular manslaughter because of the baby's death. As a result, I am on probation. We'll never be completely sure whose fault the accident was, but I've decided not to drive myself crazy trying to figure it out. God took care of me through the accident, and He's still here with me. This will all work out. I have His promise. 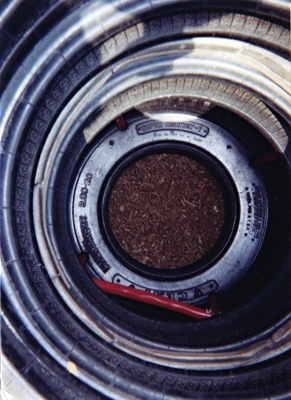 View profile
Wow, this is an amazing story. It brought tears to my eyes.