Tale of the Dishpan Hands MAG

"All right!" we exclaimed as ourpruney hands met in a high-five. Our pride was obvious in the impetuousgrins plastered on our faces. It was hard to believe this was the samesite disaster had befallen not long before.

It all began as athoughtful favor for my dear mother while she was at the doctor'soffice. The house was atrocious; it had been eons since its lastcleaning because Mom had been ill. My friend Alexis and I decided toclean the house to surprise her.

We were only 11 at the time andnot an experienced cleaning service. Still, we threw on some favoritetunes and began in the kitchen. Dishes and silverware filled thedishwasher, but we inadvertently poured Liquid Miracle cleaning fluidinto the dishwasher before cranking it to full power.

We skippedoff to the next room and worked until we decided it was time for a waterbreak. Little did we know just how much water we were about toencounter. The kitchen resembled a gigantic bathtub - we'd flooded it!Bubbles were everywhere. We slid over to the possessed machine and bothmanaged to slip and land on our tailbones. We decided we needed anotherplan of attack.

Alexis and I went to work. It took us hours torid my mother's domain of the sudsy mess. As we worked, trepidationpulsed through our veins in anticipation of her arrival. We finishedjust in the nick of time. As we were congratulating each other oncompleting the phenomenal task, the groaning sound of the garage dooropening echoed through the house. All the tools we used for our miraclecleanup flew out of sight and just as we were catching our breath, in

We knew my mom would be thrilled with thesparkling house. We grinned, our fingers tightly coiled around eachother's as we prayed we would both be at Alexis's house by the time Momdiscovered the surprise in the dishwasher! 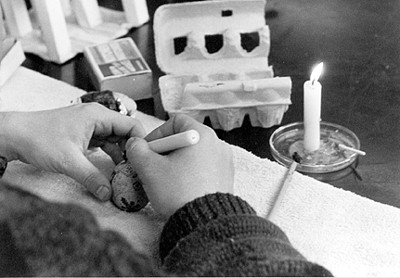