A Discovery of a Lifetime | Teen Ink

A Discovery of a Lifetime

Favorite Quote:
“Be yourself; everyone else is already taken.”
― Oscar Wilde

She started her study of the black dots when she went to the library. When she read the books and the scientific journals, she learned that people noticed the dots. People thought that the dots were some kind of sense organ. However, no one really knew what the dots were for.

It was a complete accident when she found out what the dots were used for. She placed electrodes on nerves coming from some of the sensory dots. When the nerves fired, they sent a message to the brain and created a tiny electric current. When it happened, she heard a buzzing sound over an audio speaker. She tried to see if the dots acted like eyes and temperature sensors, but nothing worked. One day she accidentally dropped a tool into an alligator’s tank. When she put her hand in the tank to get the tool out, she made ripples in the water. When the ripples reached the alligator’s face, she heard a buzz on the speaker. She then realized that the dots must be sensitive to the changes in pressure that take place when they are hit by ripples of water.

After her findings based off of curiosity and accidental discoveries, she is now studying blind cavefish. She is trying to learn whether they are blind from birth or lose their sight as they grow up. She is also going to do more research on crocodilians. She wants to find out how the genes of alligators with dome pressure sensors only on their faces differ from the genes of crocodilians that have pressure sensors all over their body. 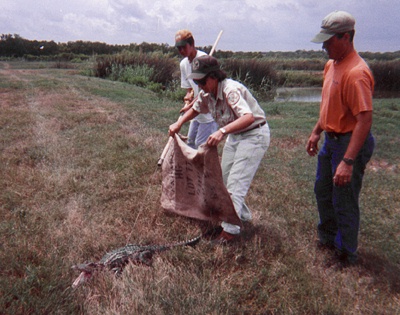 This piece is about Daphne Soares important alligator related discovery.