Imagine one moment, you are playing an amazing game of hockey. You’re a sixteen-year-old boy from Minnesota who can’t get enough of the sport. Would you change your view if you get hit by a stick in your spine, the doctors saying you’ll be paralyzed for life?
Jack Jablonski didn’t even have a chance to think that through. I wasn’t at the game, but from the people who were, it was heartbreaking and life-changing to watch. Jablonski got hit on December 30th. A small town guy turns goes viral. The story hits state-wide newspapers, is the talk of social networking sites, and of course every reporter is discussing the matter on the news. There are multiple funds set up for the guy and everyone tries his hardest to support him, even when he’s a complete stranger to most.
I don’t know him personally. Actually, I’ve never met him at all. But I’ve seen pictures and I’ve heard his story. A bunch of my Facebook friends put his logo for their profile picture to make sure he is known, and the miraculous things he’s done.
Every day he gets better and better. The doctors say he couldn’t move his arms. Do you know what he did? He moves his fingers and slowly, they’ll progress into an entire arm movement. He’s truly inspirational as a sixteen-year-old small town girl like myself because I could never even possibly relate to what he’s going through.
Jablonski isn’t necessarily a “hero” in the stereotypical sense; he didn’t save anybody, or do anything for charity. No, he is a hero because he sends a message to future hockey players or just teens in general: don’t take anything for granted. And I think that is truly remarkable.
Go Jabby! 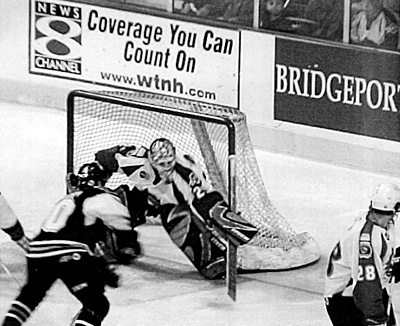