What the Doctor Ordered | Teen Ink

What the Doctor Ordered MAG

Growing up, I immensely enjoyed listening to the old fairy tales my grandmother would share with me as she tucked me into bed. I would always smile when she concluded with, “and they lived happily ever after. The end.” I wish now that her own story had been that simple, with her “happily ever after” ending. While thinking about her and looking into a sea of familiar faces, I'm grateful merely because I can recognize them. I'm thankful too because, unlike my dear grandmother now, I know who I am. My grandmother, Lula, is a victim of Alzheimer's disease, which causes severe short-term memory loss and interferes with daily life. Unfortunately, it is a progressive disease with no cure.

By the time her dreadful illness was discovered, I was 14 and had outgrown her fairy tales. However, our relationship had changed little. She was still the wise woman I would look to for advice and consolation. She was my frequent lifesaver in the sea of choppy, angry waves life often threw at me. Then, gradually, I began to notice her faltering memory. At first, it was subtle: forgetting where she had put things, the day of the week, and other common missteps often chalked up to old age. Eventually, it ­worsened and interfered with routine activities like cooking: one day she asked me where she had put the flour as she rummaged through her kitchen cabinets. I had to lead her to the one where she had kept the flour for as long as I could remember.

Soon after, she reluctantly saw the doctor. No one expected the doctor to sit us down and gravely explain that she had developed an early stage of Alzheimer's. After this, I watched her even as she cooked and cleaned, always ready to help should she forget something. I still remember the tearful voice in which she timidly suggested, “Maybe when I get ­really sick, you can help your mother take care of me.” From that day I felt our roles slowly but surely reverse as I begin to function as both a babysitter and caregiver.

Sadly, it wasn't long before the disease forced her into an assisted-living center. While it was a relief for her to have help, it was also sad that her stubborn independence was beginning to slip away. With the rest of the family, I took turns watching and helping her. Amazingly, we grew even closer. Before long, we knew each other like a reader knows a favorite book. I found myself discovering what family really means: unwavering support and love.

Not even a full year passed before her Alzheimer's progressed so much that doctors ordered constant ­supervision for her. Unfortunately, my family had trouble finding an appropriate place. Due to their ­demanding jobs, no one was available to give her the necessary supervision. Eventually, it was decided that she would stay with my family. In summer during the day, I watched her until my mother came home from work. And so we fell into a daily routine. Granny would wake up between five and seven a.m. I would get up as soon as I heard the wheels of her walker going down the hall and make her breakfast: coffee and cornflakes with two teaspoons of sugar. At this point, I would also give her her medicine and take care of her other needs. Then we often would sit outside and talk, or help each other with household chores.

When she tired of this, I would take her into the living room where she would watch TV until noon. Then I would give her her afternoon medicine and fix lunch, which we ate together at the kitchen table. For the rest of the day, I would repeat these same activities: sit outside for a while and listen to her talk about life when she was younger, watch TV, clean, or perhaps do some simple crafts together.

However routine, no two days were quite the same. I was never bored since I was always kept on my toes. As her Alzheimer's progressed, her symptoms worsened and new ones appeared. Her moods would change rapidly and I had to adapt and respond quickly. Some days, she would be aggressive and hit. She often imagined that her family, including me, was trying to poison her or hold her hostage. At this point, she would grow so irate I would need to give her medicine to calm her, which often made her drowsy. Other days, she would become frightened and wander around looking for something important. When asked what was wrong, she would reply that she didn't know who she was or where she was. I would gently explain that she was sick and staying with her family, and that she had memory loss. Other days she would be very depressed and cry. Then I would sit on the couch, hold her, and tell her what she often needed to hear: that God loved her and there was a reason for everything.

While I found this emotionally and physically draining, it was also rewarding. A bad day could be fixed if I received a look of complete trust and gratitude that said, “This is okay. You're doing your job just right today,” or, “This is exactly what I need right now. Thank you.” With her, facial expressions often said more than a thousand words ever could and were the only reward I needed for a job well done.

As time passed, I discovered in an odd way that she was not the only one being cared for. Through her, I was learning and growing. I discovered the ­importance of family and what unconditional love feels like. I discovered that a bad day can follow a good day, and that good deeds are often rewarded by the feeling of a good conscience. I learned that I could do far more than I thought I was capable of. For this, I have to thank her. I thank her because while she couldn't take care of herself, she somehow managed, in a quiet, unsuspecting way, to take care of me. She was exactly what the doctor ordered. 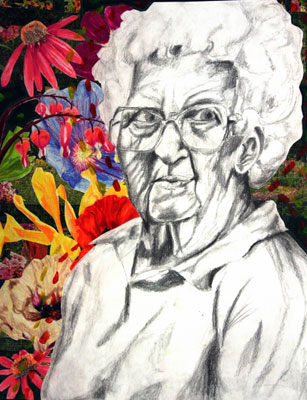 The author's comments:
This is a personal memoir I recently wrote for my AP English 11 class. This was a particulary difficult essay to write and was very emotional for me. However, I'm somewhat pleased with the results.
Post a comment
Submit your own

Eilleen said...
on Dec. 11 2011 at 12:28 pm
Eilleen, Saskatoon, Other
0 articles 0 photos 24 comments
View profile
I love this I can really relate to this as I'm caring for my grandma too and we have plenty of good days and bad days but I agree with you're perspective we're accually both caring for each other.
Baby_Doll_17 said...
on Oct. 5 2011 at 12:15 pm
Baby_Doll_17, Oshkosh, Wisconsin
0 articles 0 photos 1 comment
View profile
I loved you story but got lost and confused you were talking about helping your grandmother then you switch and talk about how you helped her. but truely it was a great story over all
peacelovenharmony SILVER said...
on Aug. 14 2010 at 2:45 pm
peacelovenharmony SILVER, Bay Village, Ohio
9 articles 1 photo 21 comments
View profile
i couldnt agree with you more its inspiring and captiving the emotion so well
Blossom<3 said...
on Apr. 24 2010 at 1:03 pm
I love this story! Although I have no family to call my own, I could somehow experience it through this memoir. I really appriciate you sharing your story with the rest of the world, and I thank you. Keep writing, you do an amazing job. :)
sarahsinginrain SILVER said...
on Apr. 3 2010 at 4:14 pm
sarahsinginrain SILVER, Setauket, New York
8 articles 1 photo 11 comments

View profile
This was an extremely well written memoir. but moreover i could tell where it was coming from, how much you love your grandmother and how far you went to help her, how she was a constant inspiration, etc. Thank you for sharing your story.