Private school. Me. Next year. It seemed like only yesterday that I got the news. Back when winter still held my world in it’s suffocating grasp, coating everything with a layer of cold, slippery, unforgiving ice. At first I felt absolute shock; all my thoughts, which usually ricocheted around in my skull like a thousand bouncy balls in a glass box, froze instantly, my mouth empty of any words I might say. Once it dawned on me, my thoughts were back in motion at light speed as I began to realize the implications. I remembered the pamphlets in the lobby, all proudly bearing Scranton Preparatory School in gold letters on a royal purple background. 100% of all Prep graduates got into college, 98% got into top-ranking ones like Stanford and Harvard and Yale.

My pride at having passed the test to receive such a prestigious honor soared, and seemed to break winter’s hold with the faint whisperings of spring that grew inside me. For the first time in my life all my wildest dreams materialized before my eyes, now suddenly real, attainable. However, there was also the three to four hours of homework I would have to muddle through each day, but it all seamed worth it. I felt like the mental equivalent of superman. I could have my first novel finished by the end of my high school career! Now, what had seemed for so long so far off was close enough to touch.

But then my thoughts took a nasty turn, and I thought about my friends. The friends I have known forever, like Kayla and Aaron and Ryan, and the friends I had known for scarcely more than a year or two like Nazia, Sam, and Brittney. What would I ever do without them? Especially Sam, who I had known for the shortest time, and yet it seemed at times that we shared a brain (Actually, we share two brains), and Kayla, who had been my best friend since we were both itty bitty first graders. And what about…Oh, I love them all the same! I had to remind myself that they all lived relatively close to me, and after all, I was not moving, just changing schools.

Later, after all the snow and ice had melted away, I sat on the late bus next to Ryan, just like I always do. (People got the impression that we were going out because of this). We were talking about electives. He wanted to take German, because then he could speak that and let the Spanish people know how he felt when they spoke a language he didn’t understand. But then I countered that all the Spanish people were probably taking German because they already spoke Spanish. Or they’ll take Spanish for an easy grade, Ryan retorted.

“What language are you taking?” He asked.

“I don’t know what they have at Prep,” I said, feeling a bit excluded because I would not be filling out my schedule and picking out electives with everyone else.

“Oh, I almost forgot about that,” something flickered in his eyes, as if he were mourning me before I was gone, but it disappeared as soon as it had manifested. "When you leave, I'll have to buy a bus seat, and a bus window, and when we talk on the phone I'll put it on speaker and sit next to it so I can pretend you're there."

A feirce aching weighed down on my heart, as I realized that this was the sweetest thing that anyone has ever said to me, and soon I would be leaving him. That was how he would remeber me, all those times sitting together on the late bus, lost in wild conversations that made no sense to anyone but ourselves. It sometimes seemed that we were the only two people on the bus. Friendship, that's the sweetest thing to me. 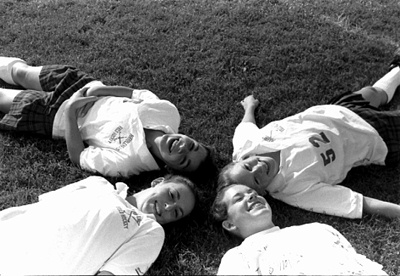 View profile
This was a really great read. I loved the amount of emotion you put into it, and I could appreciate the choice you had to make. Excellent writing!
tooswaggedout said...
on Aug. 31 2011 at 12:27 pm
tooswaggedout, Dallas, Texas
0 articles 0 photos 4 comments
View profile
I enjoyed reading this piece because I can relate to moving schools and haing to make new friends. What I didn't enjoy was the language, it seemed over spoken, I understood she would miss her friends, but she over spoke about it. The story was long and it seemed like it was dragging at some points.
PaperIdeas BRONZE said...
on Aug. 8 2011 at 1:59 pm
PaperIdeas BRONZE, Houston, Texas
1 article 0 photos 21 comments

Favorite Quote:
"…because nerds like us are allowed to be unironically enthusiastic about stuff… Nerds are allowed to love stuff, like jump-up-and-down-in-the-chair-can’t-control-yourself love it. Hank, when people call people nerds, mostly what they’re saying is ‘you like stuff.’ Which is just not a good insult at all. Like, ‘you are too enthusiastic about the miracle of human consciousness’

I'm thinking about going to a boarding school for high school next year, and friendship is my biigest problem too. I mean, I've known these people so so long and now I just...betray them?...

anyways, great piece! It flows together nicely, and you have a distinct voice

Favorite Quote:
"A friend is someone who can sing the song in your heart when you have forgotten the words"i

View profile
this is really good so much description, you must of put alot into this great job
writergirl13 GOLD said...
on Apr. 10 2010 at 8:49 pm
writergirl13 GOLD, Cherry Hill, New Jersey
11 articles 8 photos 261 comments

View profile
I love the simple, casual tone that it was being written in, but I want to know what hapens and how it turns out!!! Does the main character really decide to switch schools and not be as close to some of her friends or not???
--LoveHappens-- said...
on Feb. 26 2010 at 9:49 am
--LoveHappens--, Fairfield, Connecticut
0 articles 0 photos 342 comments

View profile
I really love the description!!! I can picture everything you are saying. Also that is so sweet. great job and I would love it if anyone read my pieces and told me what they think and rate it. Thanks
hopeIgetIN22 said...
on Jan. 9 2010 at 10:48 am
You are a great writer! im going to the same school as u next fall (well i hope so)i m writing my prep admissions essay right now
Leena7395 SILVER said...
on Dec. 26 2009 at 10:36 pm
Leena7395 SILVER, Spring Grove, Illinois
8 articles 0 photos 80 comments

Favorite Quote:
Be who you are because those who matter don't mind, and those who mind don't matter.

View profile
aw, that's so sweet! i hope everything

View profile
this is another one of your amazing pieces of work! :) the words you use flow so nicely, and i love all the emotion you put into this. it has a lot of feeling and it makes an amazing story :) bravo once again! i have a new piece of work titles "take my broken heart" and since yu have given me lots of comments and support in the past, i was wondering if you could check it out? i would really appreciate your opinion; your an AMAZING writer :) i'd love your opinion. thanks! and keep writing!! :)

View profile
aww this is so sweet! :]]
Electricity PLATINUM said...
on Aug. 6 2009 at 10:19 pm
Electricity PLATINUM, Bradenton, Florida
30 articles 0 photos 271 comments
View profile
i like it, i do, i'm becoming like a radio saying, "I like it Zero_Kiryu, I really do" with everything i read form you. Lol, i speak German (schools don't teach it because they think 'it sound to harsh'), lmao. My mom used to live in Germany, 100% of moms friends are german, my moms friends kids speak german (duh) and a English, my godparents are german and speak english, yeah, so ALL german. So it was either learn German or have no clue what's being said, because when the talking started, it was English that was the foreign language. Why am I talking about German????? I should be praising your nonfiction piece, lol! How rude of me! 5 starts, 5 prep school stars.
Nyx_X SILVER said...
on Apr. 19 2009 at 12:25 pm
Nyx_X SILVER, Moosic, Pennsylvania
8 articles 0 photos 14 comments
View profile
Aww, I feel special.