Schadenfreude: Confession of My Best Friend

“Girls! Bend and passé. Now, hold on to the bar and practice your entrechat.”
I certainly missed Miss Judd’s instructions. It’s not fair, I thought as I watched my own pitiful reflection in the mirror. I recalled the moment I tried my point shoes on for the first time. Fast moving graceful legs and Miss Judd’s voice woke me from daydreaming. My best friend, Allison, came up to me when I was watching my leg.

“When are you getting the cast off?”
She had asked this everyday, and everyday I ignored her.


It was a one cold day in January when everything had happened. I was at my friend, Nick’s house. Nick showed me a giant wooden sled, which his grandfather made for him. Not only was the sled heavy, but the sled itself was dignified with its heaviness and polished texture. It was a nicely polished sled. Climbing over the fence, we set the sled on the ground and decided to take turns. Voluntarily, Nick sat on the sled, holding onto the ropes. With a blink of an eye, he was already halfway down the hill. After a minute or so, I saw a small figure coming toward me. Nick was coming with the heavy sled all by himself. He set it up for me and I got in just like Nick, holding on to the ropes. I slouched forward to make the sled go down, but it didn’t even budge. Nick pushed my back and with a piercing screaming of both excitement and fear, I lurched down the snowy hill with such speed and momentum. Blowing wind showed no compassion as it took control of my long curly hair, which kept slapping my face. I was having a riot!


One minute I was speeding down the hill, shouting and laughing. The next thing I knew was I was lying on the snowy hill with the sled on top of my leg. Everything went white; like the white noise of TV screen. I could neither speak nor listen. Breathing was even harder. After a moment, I gradually started to get my sight back. I realized Nick was laughing. Laughing at me. Flipping his blonde hair, he helped me putting the sled aside. I tested my numb leg. Was it frozen or was it because of the pain? I could feel nothing. Nick quickly got his parents and helped me get back into the house. Nick’s father put me into a chestnut colour couch. I pulled my jean up to my knee and the moment I saw my ankle, I screamed, making Nick’s sleeping dog, Mia, jolted. My ankle was swollen so badly that I thought there was a tennis ball stuck under the skin.


As I was looking at my own reflection in the mirror of my ballet class later the next day, I regretted not calling my mom right away. I stayed at Nick’s house until my mom had come to pick me up in the afternoon. I told her it wasn’t that serious when my mom noticed me limping.

I was writing an essay about homeless people for my English assignment when my ankle started throbbing with pain. My mom took me to the emergency. It was almost midnight. It didn’t actually take that long waiting but I felt it was longer than mom cooking the turkey on Thanksgiving’s Day because my mom didn’t talk to me for the whole time in the hospital. The doctor put a plaster cast on my left leg and gave me a pair of crutches. I was half excited about getting crutches because I was always jealous of people with crutches. Hopping seemed so fun.


The next day, Mary and Allison were busy signing and doodling all over on my cast. Everyone, even some people I didn’t know, asked me what had happened. Walking down the hall with crutches under my armpits was a bit exhausting and my ankle hurt if I forgot to take my pills; but it just felt so good – being different from others, getting attention, and especially, missing gym class!


Allison helped me to sit down at the cafeteria with my food tray.

“Christine, how are you going to do ballet lesson tomorrow? Or swimming lesson on Saturday?” she asked, looking at her food.

“Um…well…” I started to mumble in sort of panic because I hadn’t thought about those. I cleared my throat and continued, “The doctor said it wasn’t that bad. Last night, I took the x-ray picture and he told me there is a little crack; that’s what’s bothering my ankle. I’ll get rid of the cast in a few weeks and then, I’ll be able to catch up, including the performance in May.”

But inside, I was starting to get worried. My ballet class had a performance in May and Miss Judd had given me one of the main roles. Will I be really able to catch up? I asked myself, gulping cold orange juice. It was already the end of January; time passed so quickly.


The next day, I went to my ballet lesson even with my crutches. I didn’t feel excited anymore; the whole thing looked ridiculous. Miss Judd and several other students asked what had happened as I’d expected. I told them every detail of the accident, and once again, I felt a surge of excitement from their attention and sympathy. But when I finished my story, Miss Judd didn’t seem pleased. Obviously, I would have to miss my rehearsal times. I sat in the corner of the room, watching students putting on their point shoes. I saw Allison in her pink ballet dress, timidly approaching Miss Judd. I saw her talking to Miss Judd but I couldn’t hear the word they were saying because of the loud music. Allison, suddenly, looked at me and smiled as she kept talking. Miss Judd nodded and she also looked at me. What were they saying? They were talking about me; I was sure. Miss Judd came beside me and asked if Allison could use my point shoes just for today. I almost protested, telling her Allison had her own. Miss Judd explained to me that Allison left hers at home, but I wasn’t listening to her; I was looking straight at Allison who was giggling with her friends. Miss Judd tapped her foot impatiently, telling me that Allison needed them. I was ignoring her, looking at the cast on my ankle, when she said, “You don’t even need them today, Christine.”
Those seven words felt like thousands of knives penetrating me, bursting a lump in my throat into tears. I hesitantly handed my apricot coloured point shoes to Allison, who was smirking at me. By then, millions of questions filled my brain. Shouldn’t she thank me? Shouldn’t she be feeling sorry for me? What was hidden under her dirty smirk? Was she lying about the point shoes? Will she be taking my spot in the performance?


After the rehearsal, Allison gave my point shoes back, still smirking. I finally asked her why she was smirking at me. And the moment she opened her mouth, I wished I didn’t ask her why.

“Miss Judd told me I could take your role in the performance in May.” She might have seen my watery eyes, but instead of comforting me, she provoked me. “You don’t need to worry about it, Christine. It’s because she wants you to have rest; fully recover and come back.” She changed her face, frowning abruptly. “You’ve always had main roles. You gotta give me a chance too. And by the way, Miss Judd allowed me to use your point shoes until the rehearsal, maybe for the performance too. They work better than mine.”

I wanted to yell at her, calling her a pig – a greedy pig who yearns for everything! Why was Miss Judd allowing her to take everything from me? The world never showed compassion to me, I thought.

She was trying her best no to laugh out loud and I was trying my best not to let the pig in front of me seeing me crying.


I was getting physiotherapy when the phone bell rang. I answered the phone while my physiotherapist was treating my ankle with hot blue gel and a weird machine. It was Allison. I listened to her while I was getting the physiotherapy. She started with how the weather was nice and we should go out to the park. The point was to hand me my point shoes back. I had been forgotten about it since last May when Allison had taken my role and played in the performance. I looked outside from my wide spotless window, still listening to her babbling. I turned my attention back to the phone when I heard her saying she was sorry. She was telling me how she felt bad after she had ditched me, smirked at me, and taken my point shoes and opportunities from me. She said she had been jealous of me, and had been silly. The weather was nice, indeed. Now my ankle was getting better, I could walk a bit in the park. I blocked the phone with my hand, making sure Allison didn’t hear me, and asked my physiotherapist if she could end it a bit earlier than usual. She approved and I got back on the phone, telling her I wanted everything that belonged to me back at the park that afternoon – everything, including my apricot coloured point shoes and especially, our long-lost friendship. I put the phone back into place, approving my best friend’s confession. 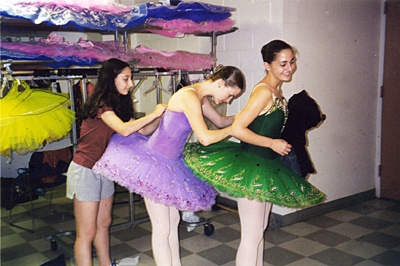 The author's comments:
I was inspired from my personal experience between my best friend and me. 'Schadenfreude' is German, meanin happiness at the misfortune of others.
Post a comment
Submit your own