Out the Clique | Teen Ink

Being in high school is not the easiest part of life. I am sure life is going to get worse, but my goodness! High schoolers are notorious for being some of the nosiest, self-centered, messiest people on this Earth. Can I get an Amen? Being a teenager in high school, I would know this. I know we have all had a situation to where somehow the friends we start out with are not the ones we end up with later on.


Now, in high school there are several cliques. There are the popular cheerleaders, the band geeks, the goths and emos, the “gangstas” (I myself am one), and the regular people. Usually, the cheerleaders are envied by the geeks, who secretly want to kill them. I would be wrong if I said that all cheerleaders were messy. Have I met any stuck up, rude cheerleaders? Yes, I most definitely have without a doubt. Have I met some down to earth ones? Yes, infrequently. What a shame. This is not about cheerleaders though, so back to the topic.


Anyway, I have personally been a victim of the case of the missing friends. Unfortunately for me, I was a victim at a young age. Hanging with the wrong click will bring a whole plate of trouble to your face. At the moment it might seem all fine and dandy, but eventually you become so full of bullsh*t, and the truth has to come out. Hopefully out a good end. Being naive comes naturally to us youngsters. We join hands with these so-called friends, who really when in light are our enemies. Now, that’s a problem.


For instance, back when I was in third grade, I was so ecstatic to be in a new class and meet new people. It was a new year, and I was ready. Within the first week of school this group of girls approached me. They were nice and seemed to be the “top dogs” in the grade. Now, me being naïve and all, I slowly but surely started to become apart of them, the click. Normally in cliques there is a leader. Our clique leader was as mean and small as they come. She certainly did not cut me any slack, and I certainly did not consider her to be a friend. The sad part is that I dissed my real friends for the clique that did not like me in the first place. It’s like she was out to get me; she wanted her reign to be known. Over the next four years, we still were together, throughout all the fights, drama, and break ups. We were the loved but hated ones-the role models. An unusual event happened at the end of our sixth grade year together. Two of our clique’s top dogs left, and then there were three.


Not surprisingly, the seventh grade year was a struggle. It was not the same without the original two, either though I secretly hated one of them. However, them leaving gave me a chance to open my eyes. For years I felt like I could only be a friend to them and look down on everybody else. Slowly, I started to branch out and meet new people who had more in common with me then the girls in my clique. At that time I knew what I had to do. I had to go with what I knew was best for me in the long run. Sure they were good friends, but in general I knew it was not genuine. We were not meant to be friends. Real friends do not talk down to each other or talk about each other. They never sincerely liked me. I was just an opportunity to test drive a new car.

Ultimately, I do not regret the experience. I have learned so much about myself and other people. They gave me the knowledge I needed to be able to tell the real from the fake. I am still naïve, but nowhere near as much as I used to be. I love the real girls who have my back no matter what. They are my rounds, big doggs, sistahs, and ride or dies. We are a real clique, because we click with each other. Hi, my name is Valencia and I am proud to say that I am officially out of the clique.:)` 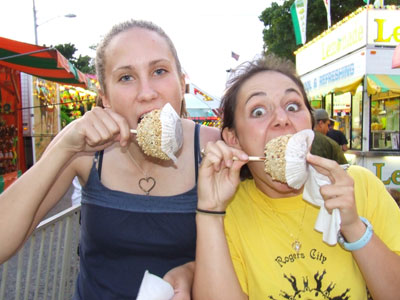 The author's comments:
My friends are the ones who inspired me to write this piece. Everyday I see them and they tell me "I love you" and we're always smiling.
Post a comment
Submit your own