Blissful Youth Of Mine | Teen Ink

Blissful Youth Of Mine

Favorite Quote:
She makes it through her day, but doesn't just “make it” through her day. She holds within her at all time the faith that she belongs, even when she doesn't belong. She belongs to the world; she belongs in her life; her heart and mind and soul belong

I lay in my bed at about 11pm enveloped in the warmth and cloud-like embrace of my blanket, flipping through songs on my iPod and enjoying the comfort and bliss that came from letting my heavy eyelids fall after a long day of blinking them open. My thoughts drifted to and fro aimlessly like specks of dust floating in the light as I absorbed the conflicting emotions my wake had brought me.

Lately, it had seemed like my life was at once coming together and falling apart. The wisdom embedded in me, grown stronger by past troubles, knew that this was because I had first needed to shatter in order to be renewed by the ever-eroding tides of change. The confused child in me was still mourning the complexity and tragedy of life and living. Morosely, I considered that my soul was divided into two resolves; one that sweetly whispered to me, “Let it go, tomorrow is not yet here,” and the other that slapped me on the wrist and scolded, “Open your eyes, life does not pause for the weak.”

These two pieces of me had always coexisted and sometimes had even cooperated with each other, but often all I wished was for a Judge in shining armor, or long black robes, or whatever, to struggle to the surface of my morale and to point out whom was the Devil and whom was the Angel, to tell me how to live my life well. I supposed there would never be a correct way. Yet, the internal battle continued within as I faced the tumultuous currents, flash-floods and occasionally calm waters of my deep abyss of fatal existence.

Music continued to sing to me as I wiggled deeper into my snug cocoon of cotton paradise. My thoughts began to focus as the distractions of mindless daily tasks swam farther and farther away.

I had a therapist once, a few years back, who told me that we are all like human chemistry kits. The slightest triggers can create a chemical reaction in our souls; we are defenseless as poisonous acids are dumped into the fragile glass beakers of our hearts and we watch our hopes, desires and emotions slowly bubble up, fizz and sizzle to the top, and silently overflow onto the table. We are each our own element, with a specific formula. With some elements, we combine and thrive, while with others, we churn with rage and sorrow and mysteriously implode. When we stay away from the nasty elements that melt away our glass, we are happier, healthier people. Likewise, when a bond with another element is suddenly broken, torn apart by the universe, a piece of us is lost. Half of our beakers remain empty for a while until we find another element that we find we naturally bond to. Most elements can survive on their own though, otherwise, Nature would have a tough job on her hands.

This analogy consumed my consciousness and mingled with other concerns of my own element. As I considered my relationship with my father, I felt an over-all numbness that I could not quite place. We hadn't spoken since I had told him that I no longer wished to see him. I had left him behind with all the expectations and responsibilities he had burdened me with, my last words to him being, “Fine, you win,” as I slammed the door and he drove away, smug and blissfully unaware that it was the last time he would see his youngest daughter for a while. Then, the weight shifted inside me as a bond was broken, and I could finally breathe, no longer needing to sustain his hurtful nature in mine.

The musicc on my iPod switched to a girlish, upbeat country song by Taylor Swift. So many of my friends would disapprove of it's presince my Playlist that I almost felt ashamed myself. My first love would have scoffed. Of course, he would never have known it, because I had continuously hid small pieces of myself from him, knowing full well this was not what I would feel the need to do had we been right together, all the while denying it was wrong. A twinge of remorse, sadness, nostalgia and, curiously enough, relief, slid over my element as the truth I had confronted and since evaded slipped into my thoughts. I had been so happy, happier than I thought I had ever been, then it had all suddenly fallen apart. Suddenly was perhaps not the right word; it had seemed sudden, but the only sudden thing about it was the sharp pang in my heart as I was metaphorically trampled over by a pack of bulls, because in fact, it had been slowly creeping up on us all along. We had done it all wrong, with expectations too high to live up to. And yet, I knew now that it wouldn't have worked out anyway. Now that the pain had passed, I was lighter. And thus another unhealthy bond was broken, leaving an irreversible impact on my element that left me peaceful and at ease, no longer thrashing at the sides of my beaker in attempt to break free.

And so I lay in bed, considering these two most recent changes to my nature. I thought of all my responsibilities and expectations; expectations of greatness, of attaining the approval of everyone, of attaining perfection and saving the world. Of having the best taste in musicc, I thought, as I continued to flip through my Taylor Swift collection.

What happened next, I couldn't pin on any chemical trigger other than the truth had simply caught up with me. I felt myself becoming lighter as a transparent reflection of my body slowly left me and floating to my ceiling. I would imagine her as a young, average-sized girl with short, wild dirty blonde curls and bright blue eyes, with cheeks the shade of a constant rosy blush, or the color your face gets after running in the sun at the beach with the salt corroding your pores. Like an angel, she would have been wearing a long, white dress, the color of purity and youth. I felt her, watching me from her peaceful white cloud, and then felt a cool kiss of gentle wind on my cheek as she reached down and stroked my worn skin.

Slowly, she ran her hands over all the wrinkles and scars on my body, cleansing me of the blemishes of my past, pulling the unkind thoughts out of my soul, until I was smooth and clean. As she pulled away, she lifted a cloud of darkness off of my shoulders, and gently blew it away as if it weighed less than a feather. I watched in wonder as the dark fumes cleared out of room and were swept away from the small corners of my heart.

Then, I felt my consciousness float up to the angel that was hovering above me, that other me that weighed less than a feather, and I gazed upon my earthly body laying in her safe cocoon of soft sheets, bringers of sweet dreams and needed repose. I saw a young fourteen-year-old girl, only just starting her life, only beginning to understand the world. I saw a confused, conflicted and deeply compassionate and intelligent youth, who had taken the responsibility of the world into such a small capacity. I saw a naive teenager who had just gone through her first heartbreak and was already looking to the future, a strong, pure soul with a good heart who would one day do big things. But for now, I would let her be a beginner, and let her make as many mistakes as she needed, and I wouldn't force her to be more than she could be or hold more than her own weight. I would let her be free.

Blissfully, I floated back down to my body, and the mirage and I were reunited.

I felt like a miniscule, unimportant, speck of light on the everlasting spectrum of the universe as I turned up the volume on my T-Swift and hazily smiled in recognition of myself at last. 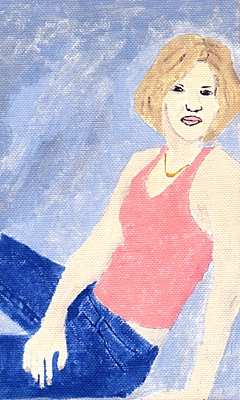 The author's comments:
Inspiration struck... this is a peice packed with metaphors about a soul-lifting experience I had one night around 11pm... well, you can read the rest.
Post a comment
Submit your own