To Ski or Not to Ski | Teen Ink

To Ski or Not to Ski

“There are really only three things to learn in skiing: how to put on your skis, how to slide downhill, and how to walk along the hospital corridor. ~Lord Mancroft, A Chinaman in the Bath, 1974
The Fear: Ever remember feeling unsteady, weighed down with something cumbersome that resembles armor for your feet, as if you’re about to fall down a slope most likely leading to an untimely demise. That’s what I felt the first time I tried to ski. Ski Big Bear at Masthope Mountain in Lackawaxen, Pennsylvania at what age I cannot clearly remember, 12 or 13 years, but definitely in the wintertime. That where I faced my then current foe.
My Sister: I realize now that it wasn’t strange then when my sister took to the sport faster than I did. During that year she was studying at the Aviator ice-skating rink to learn how to skate, what a shock. I don’t believe I will say this to her face anytime in the near future, but my sister was quite good. Add that to her extra surplus of chutzpa and she was good at skiing. Not that I’m saying that she didn’t have her own tumbles, especially on the black diamond affectingly coined “Devil’s Run” due to her bravery or foolishness I cannot tell. But I envied her for this at that time.
The First Time: Now back to me. I am not ashamed to say (now) that I did fall as one often does when facing something new and foreign. This one had her own plate of nose drips, diving dips, green bruises, panic attacks, wet cloths (from the snow), and a sprained ego. But incredulously I survived and have continued to ski in the winters afterward.
December 26 and 27, 2011
The days before, I have gone skiing. I have donned the bulky rented ski boots, feeling like a Thanksgiving stuffed turkey in my black tights, ski pants, wool socks, black Uggs, long-sleeved shirt, a sweater, and a heavy winter jacket; yummy. December 26, 2011 was the first time I started skiing since the time I stopped skiing and I felt some of the trepidation I had experienced the first time I started skiing. It started off painfully when just after I stepped onto the counterfeit snow that I realized my boots were cutting off my blood circulation. I limped all the way back to the rental place while my ankles were screaming and I was mentally saying, “OWWWWWWWWWWWWWWWWWWW.”
When I finally adjusted and went down it suddenly seemed very familiar. The cafeteria-like setting with the stark white tinting and cuisine commands- pizza/ French fry*, it felt like déjà-vu. So the time went as I slide down the slopes, sometimes normally, sometimes with me flopping on my gluteus maximus. But as often is the case, it was like riding a bicycle* or being an elephant; it was just something you didn’t forget.
So as my mind focused less on a horrendously impending doom, it started to notice and observe my surroundings. I noticed how the ice in the snow resembled gleaming currents of silver. I laughed and adored the polychromatic porcupine hats that graced the heads of red checked skiers. I watched two young boys challenge one another with their ski poles, their skill in fight matching those of the Musketeers. I gazed at the combination of gray, silver, and blue that made up the mountains beyond the slopes, so beautiful in the way no one would ever realize out of these simple definitions of color. As I sat on the air taxis (ski lifts) that were defying gravity and my feet were weighed down by my chunky footgear, I felt light as I breathed in the brisk wintery atmosphere that I was living in.
Note: Don’t feel embarrassed if you fall during skiing, snowboarding, or any other winter sport. Every new sport requires a few flops to get better. Just try not to crash into a ski net and trees like I did, OK?
* “Pizza” and “French Fry” are two skiing moves. If you want to find out what they mean, go online or actually go skiing.
*Maybe not a bicycle since I stopped riding about the time I couldn’t use training wheels anymore. 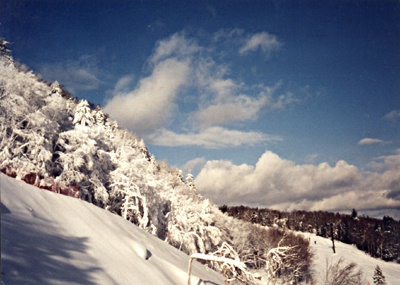