All these were characteristics of the Vacation Bible School, showcasing all sorts of unbridled chaos. But one, like myself, could argue that it is absolutely the best kind of chaos. A slap in the face, if you would, of the many things that happen in the Navajo Reservation.

Every year, the high-schoolers in my church go out to the “Rez” near Flagstaff, Arizona and provide a summer bible school to children who otherwise would not have been able to hear about the good news of Jesus Christ. Our mission was not only to lead by example to bring them to Christ, but also to hopefully give these kids a friend; a way to get away from the misery of broken homes and broken families.

I was put in charge of the 4th and 5th grade class. After many months of meetings, long hours, and mental preparation, the other teachers and I were ready, all under a $250 budget.

It was finally time. As the kids trickled into the outdoor shack we had built, I couldn’t help but notice the similarities: Every member had long, deep black hair, sometimes even to their waists, the boys included. Groups of brown-skinned children scurried everywhere, and they all seemed to be the same child, to the amusement of the other teachers.

As my eyes wandered to the great plains of the Rez, they locked on to a small figure coming our way. Dressed in white was a little girl, pale-skinned, with ravishing red hair, and holding the hand of an even smaller boy with the same strikingly contrasting features. She came up to me, blue eyes beaming, and said, “Hi, I’m Jasmine and this is my little brother Connor. You can call me Jazzy for short.”
Little did I know at that point, but she and I would become fast friends. Every moment she could during that week, Jazzy would cling to me or hold my hand, dragging me here or there, and it seemed like it would never end.

“Oh, you want to go to the piano? Now outside then. Okay, I’m the big bad wolf today. Why don’t we go to the tables and color? No, I’m sorry I can’t give you a piggy back ride. Where are we going now… ?”

The best kind of chaos.

It was during the midway point of the week, and it was time to take kids out one-by-one to talk to them. It was usually around this time when they were comfortable enough with us to possibly open up about their lives so we could focus our prayers on specifics. As per policy, boys would go with male teachers and girls would go with female teachers. As Jazzy was taken out for a walk on Wednesday afternoon, I couldn’t help but to be a bit jealous. As silly as it was, I had made some sort of special connection with her, which was fully and powerfully accentuated with the next bit of news.

“Hey Greg,” squealed Megan, the teacher that had brought Jazzy out. “So you know Jazzy? She kind of has a crush on you, she told me.”
Up until then, I hadn’t realized that news could travel so fast. The high schoolers knew it. The adults knew it. The kids knew it. Even Jazzy herself knew it. But entertainingly, she wasn’t the least bit fazed and kept clinging on to me.

The rest of the week was filled with jokes and nudges from other high schoolers over my new “girlfriend”. Worse, Jazzy was enjoying it all too much; she was telling everyone that I was her boyfriend in turn. She made both of us matching bracelets, pink and white. She made a dog tag during class that spelled out her name and mine. She started wearing her version of makeup from her brand new makeup bag, that spilled over the eyelids on to the rest of her face, kind of making her look like she was crying.

Obviously, for a children’s program, this couldn’t be happening with me fully endorsing the romance. We had to tell her to call me Uncle Greg like the other children instead of just “Greg” that she insisted my name be. I kept my distance as much as I could without letting her feel betrayed (this was one of the tactics we learned in first-base training for children), but I still favored her over the others. I always volunteered to take her home in Car #8, where a car ride home was enough to make a few more connections. Every car ride was joyous and wonderful, all until the last one.

That fateful Friday afternoon, after the last class of that year, we all crammed into Car #8. Me, Jasmine, little brother Connor, our driver Dan, and the rest of the tiny Navajo children were all forced to fit in a small van. We laughed, we joked, we played “if-you-talk-or-laugh-you-like-me”, all sorts of nonsensical fun. Each child was dropped off to their respective homes, sometimes even five or more would pour out of our van to one house. Soon, just Jasmine and Connor were left in the van.

As we rounded the corner to view the wide valleyed expanse that was Jazzy’s neighborhood, something seemed a bit off. Jazzy was hidden behind the back seat, crouched low and hiding her face. A small whimper could be heard as we approached the straightaway.

By now, the rest of our car was listening.

“I’ll get beaten! Again and again… black and blue… don’t make me get the paddle!”
“Jasmine, why?”

We began to hear a wail, coming from the trunk of the van where Connor was.

“My mom told us not to come to VBS, but we still did… if she sees me with all my crafts, she’ll know I went! I just wanted to see you one last time…”

The wail grew louder. Connor knew what was coming.

I turned around; a car was following us. It was Jasmine’s mom.

“No, not the paddle… black and blue… over and over… I’ll just tell her I was hiking with Connor all morning, up in BigFoot Mountain!”

This was all we needed. Dan zoomed around the corner, so that we were out of sight. Jazzy frantically directed us to BigFoot Mountain, and we got there in no time.

She nearly broke the sliding door down trying to get out of the van. She hurried to open the trunk.

I went to pick up the wailing mess and set him on his feet on the dirt ground. He rolled over into the same fetal position he had just been in.
Jasmine turned to run by herself, stopped, turned around, and came to me. Hurried and panicky, she dumped all of her things into my outstretched hands: the dog tag, her bracelets, and her brand new makeup bag.

“But when would I return these to you??”

“Next year, just keep them…”

She pushed them deeper into my hands and wrapped her diminutive arms around my waist. Through tears, she delivered her final words to me:
“I’ll miss you, Greg… don’t forget me.”

And with that, crying, wailing, she ran up the rocky hill, dragging Connor with her, and disappeared around a bend of BigFoot Mountain.
I reentered the car, and we sped away. The car ride was in silence, save for sounds of sobbing. My own.
“Dan, can we do anything at all to help?”

Dan sighed. “I’m afraid we can’t do anything here… the Rez has its own rules, and we can’t protect against something like this.”

The rest of the car ride back, I was drowning in my own irrational thoughts, trying to think up solutions of possibilities that would never happen. I hadn’t planned that image to be my last of her. I was angry. Angry at Jasmine’s mom, angry at the Rez, but I knew it was no use.
As we reached a stop back at Twin Mesa, I bolted. I ran up a large hill and stood, surveying the seemingly never-ending plains and plateaus of the Arizona landscape. As tears poured, I thought of myself back home. Selfish. Spoiled. So blinded by the harsh realities that children go through every day there on the Rez. It wasn’t about me. It never was.

Jazzy’s case wasn’t the only one. There was so much more brokenness, and those who desperately needed to know what the love of Jesus felt like.

I took it as an experience never to forget. A hard lesson to learn.

A slap in the face, if you would, of the many things that happen in the Navajo Reservation. 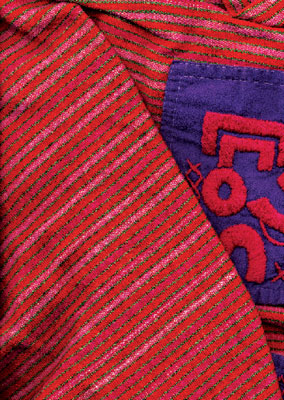