Why Do We Write? | Teen Ink

Why Do We Write?

Favorite Quote:
Practice is not trying until you have it. It's from "I have it" to "I can't mess up."

~Lucy Shaw, a violin teacher I had the honor of working with.

Why do we write in private?
I was confused when I realized all the writing I’ve done was in secret, with no little brother looking over my shoulder, or a father demanding for my opinion on the bananas he bought. I’ve always written while curled up on my double bed with red sheets, tangled blankets, and books piled on the side I don’t sleep on. Even today, with my heart aching over an atrocious audition, I had to escape to my room in my grandparent’s house, so I could write! So what’s going on when I refuse to show my writing to my dad, or when I close my laptop as fast as I can when I hear my brother coming? What’s the need to keep it secret?

Writing is private; sometimes it reveals stuff about you that you didn’t know about. (Well, you did know about it, but you never put it into words.) I don’t want to have parents pouring over heartfelt, sentimental writing about my seventh grade love, or my brother snorting at a poor attempt at a science fiction story, for the same reason I don’t want to hear critique of my music; it hurts, and it’s embarrassing. I could barely hold back tears as I left the audition room today, with the supervisor saying, “You did fine,” over my shoulder. Praise is nothing if it’s not earned, and I don’t want “You did fine,” on each piece of my writing. It hurts when it’s somebody you don’t know, but it’s even worse when it’s family. I reached for the sky on my audition, but tumbled back down to the ground when the sun melted my wings.

Why do we write in private? We’re shielding ourselves from criticism on first drafts, or writing we know is inferior. I knew I could’ve done better on my audition, but only if I had practiced. We can practice on our writing too, and bring it up to a standard where we won’t be embarrassed of love stories and science fiction; we’ll be proud of the effort we put into it, and the revisions we made.

After skulking, I decided to get out my French horn, and try again. 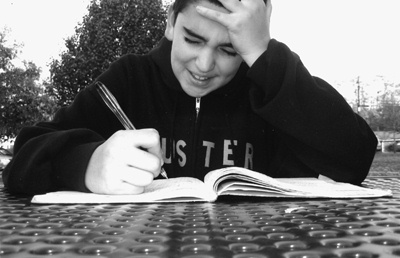 The author's comments:
I had an audition today to see where I should be placed on my french horn. I hadn't practiced in at least a month, and I could tell the reviewer was disappointed in me. It hurt. Badly.
Post a comment
Submit your own