What do you think when you hear about slavery? When first hearing about slavery in the bible, many people wonder why God doesn’t stop it or free the slaves. Does God even care about them? Many Christians will read it but push it to the back of their mind while still wondering how a loving God could allow such a horrible thing to continue. The thing that must be understood when reading about slavery is that slavery back then was different than it is now.

“Then the Lord said to Abram, ‘Know this for certain: Your offspring will be strangers in a land that does not belong to them; they will be enslaved and oppressed four hundred years. However, I will judge the nation they serve, and afterwards they will go out with many possessions.”
Genesis 15:13-14
God told Abram (Abraham) that his offspring would be enslaved. So why did God allow this to happen? When the Israelites entered slavery, they were on the verge of greatly outnumbering the Egyptians. The Pharoah, who had not known of Joseph, became afraid that they might be overtaken by the Israelites and enslaved them. There are several reasons God may have allowed this time of slavery though the bible never tells us why God knew it was coming and didn’t stop it.
The first reason could relate to the fact that Israel was a very disobedient nation. Several times throughout the old testament there are stories of a great deal of sin and complete betrayal. There are stories of idol worship, sexual immorality, and lack of faith. Could it be that Israel’s enslavement was punishment?
A second possibility is that in freeing the Israelites, God demonstrated His immense and incomparable power. As Pharoah denied the Israelites freedom time and again, God sent great plagues. He also was behind the act of parting the Red Sea and providing for the Israelites in the desert for the forty years that they were wandering. God demonstrated His great strength through the many times He came through for the Israelites.
Another option is God using such an instance to speak to us. Even though God demonstrated His great power, the Israelites never seemed to have faith. While the plagues were in process, Pharoah was furthering punishing the Israelites, so they lost faith. When the army was chasing them, they lost faith. When they were in the deserts forty years, they lost faith. While Moses was up in the mountains, even his own brother led the Israelites as they lost faith. Are we not often slaves to this world, not believing God will come through in the most dire situations. And yet we are God’s people and Abraham’s offspring. We have reason to have faith in God.
When considering individual cases of slavery, the needs of those enslaved must be remembered. Many slaves in the bible were actually not slaves that were forced into labor but instead it was a privilege or a relief from the outside world. Many families were provided for through the parents or children being slaves in a household where there needs would be met. That often meant the difference between life and death. Some slaves did not have any money to pay back debts or loans and would instead ask to be a slave in their debtors household. And not all slave owners were evil and corrupted but God commanded that they take care of their slaves.
God’s view on slavery is actually a lot different than many think. Many will say that God’s view on slavery was cruel and that He supports the idea of slavery or thinks it is okay for slaves to be mistreated. An argument that is commonly used is that because He establishes rules for slaves and their slave owners, He condones it. It doesn’t necessarily work that way and it is much more likely God only supports mutually beneficial slavery. But some of His views can be seen through verses scattered throughout the bible.
Galations 3:28 “There is no Jew or Greek, no slave or free, male or female; for you are all one in Christ Jesus.” So it is established and was established quite some time ago that slaves are on equal ground as everyone else. They are just as valuable and God loves them no less.
Colossians 4:1 “Masters, supply your slaves with what is right and fair, since you know that you too have a Master in heaven.” God also has established a law that masters should not treat their slaves badly, contrary to most slavery today.
1 Peter 2:18 “Household slaves, submit yourselves to your masters with all respect, not only to good and gentle but also to the cruel.” This corresponds with another verse, Colossians 3:23, which says that what we do is not for men but for God. We as Christians are ambassadors of Christ and it was important for the slaves to submit to every kind of master because it glorified God! It showed that they had a different kind of power hidden in them that was not of this earth. 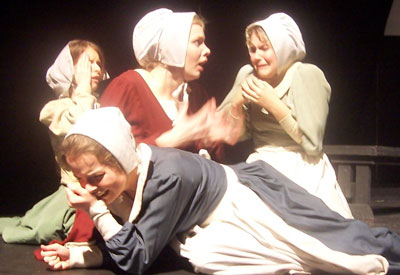 Favorite Quote:
The Skies not the limit....the Stars are:]