At age sixteen, Melba Pattillo was faced with what at first appeared to be a typical teenage task: going to school. However, in Melba’s case, this experience was far from ordinary. The place Melba would be attending in 1957 was Little Rock Arkansas’s Central High School. She, with eight other students called the Little Rock Nine, would head to Central High School together as the school’s first African American students. There was only one thing standing in their way: an angry mob of violent segregationists ready to torture and even kill them. Melba’s mission as a warrior for integration was just beginning.

We study the Civil Rights Movement in history class and hear about the atrocities one human can perform against another just because of his or her skin color. There is no question that studying the struggles of integrating African Americans into white society is generally intriguing. Yet, Warriors Don’t Cry provided me, as the reader, with a new dimension to the stories I’ve heard before. Since it is an autobiography written by Melba Pattillo Beals, her first-hand accounts of integration are personal and stunning. Hearing the author’s thoughts and reactions as she is being taunted made me feel that I was by Melba’s side in Central High. Also, Warriors Don’t Cry enlightened me about yet another struggle integrating students faced. I was shocked when I read about the resentment from the African American community towards the integrating students like Melba and the Little Rock Nine. This dislike was particularly strong among Melba’s African American friends, some of whom she had known from a young age. Reading this amazed me because I was under the impression that all African Americans supported integration. Her story taught me otherwise.

On its own, Melba’s story deserves recognition, and makes Warriors Don’t Cry worth reading. However, the way Ms. Beals writes her narrative is phenomenal. During the entire book, I always felt like I was inside her head and by her side. As she prepared to defend herself against each attack, I wanted to reach out and tell her it would all be okay. Every time she turned a corner, I felt “jumpy” as to whether or not an attacker would be waiting for her. During difficult decisions, I wanted to sit next to Melba and analyze them with her. I felt for 226 pages as though I was sitting on her shoulder. That is an incredible experience for any reader and one that makes Warriors Don’t Cry a great read.

Overall, I highly recommend this book. Not only is it a compelling story, but it is told extremely well. If you are currently studying the Civil Rights Movement in school, I implore you to read Warriors Don’t Cry. It will create a new depth in your understanding that is unparalleled. This book is worthy of eleven stars out of ten, and I know that other readers will be enlightened and intrigued by Melba’s story for a long time to come. 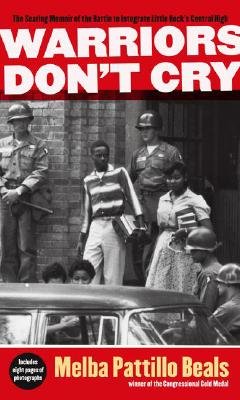