The Girl Who Could Fly by Victoria Forseter | Teen Ink

The Girl Who Could Fly by Victoria Forseter

The Girl Who Could Fly sounds like a story packed with action, but its basically a feel-good story. The book is centered around a girl named Piper McCloud who believes that if you truly believe with your heart, you can do anything. In this book, 10-year old Piper McCloud lives with her old parents on a farm in Lowland County. Piper has never been given much freedom, and while the other folks think it's because she isn't right in the head, it's actually because Piper can fly. On day, after a series of unfortunate and disappointing events, Piper accidentally reveals her ability and instantly becomes world-wide news. Shortly afterwards, she gets a visit from a very caring, nice, and beautiful government. The agent, Dr. Letitia Hellion, comes with an exclusive invitation to join her school for kids with special abilities just like hers. Piper is then happily whisked away to I.N.S.A.N.E., where she meets 11 kids who have awesome super powers. She finds her 11-year old enemy, Conrad, a mad genius. She also finds great friends like Violet, who has the power to shrink at will, and Bella Lovely, who can color anything at a touch. Through a series of fortunate (even though it didn't seem like it then) events, Piper realizes that the facility isn't as perfect as she thought it was. She quickly learns that not everything is not as it seems, and that anything worth having doesn't come with out a fight. I would give this book a 8 out of 10. There were parts in this book where the author, Victoria Forester, could've added details. There were also parts where she could've expanded on what she was saying. There was also a part in this book where I was seriously confused on whether this book took place in the past, present, or future. There was one really cheesy, but touching, part of the book, but it was bearable. I think Victoria Forester did a pretty good job portraying the characters of these kids. She made the character's personality match their ability perfectly.For example, Bella, who had the power to spread color, was joyful, optimistic, kind, caring, and always smiling. Piper McCloud was portrayed as a bubbly, optimistic, and determined girl. She cared for others and wouldn't give up. This book didn't have much action, but it definitely had a lot of adventure. This book is long, but it's an easy read. Even though I though Victoria Forester could've done better on some parts, I still liked 'The Girl Who Could Fly' and would recommend it to anyone looking for a fun book. 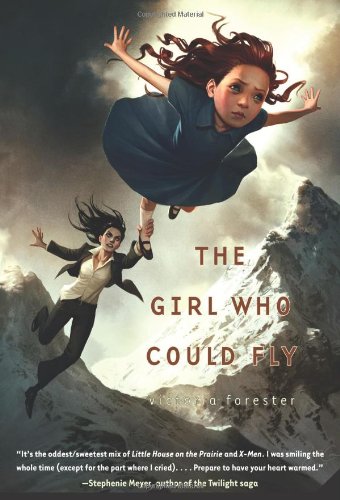 
Buy from Amazon
The author's comments:
I would give this book a 8 out of 10.
Post a comment
Submit your own