Few books have touched my heart as dearly in the first fifty pages as did Josh Sundquist’s book, Just Don’t Fall. I devoured it in less than a week, eating up the pages and drinking up his luxurious words. I cried within the first seventy pages, and laughed so hard I ended up crying some more. Very few books have that effect on me. His characters were so vivid and lovable. I couldn’t help but become attached to them early on. The remarkable part of his book is that, in fact, it is an autobiography. But not just any autobiography, it is a remarkable story of his journey through cancer, amputation, and achieving his dreams of competing in the Olympics and later becoming a motivational speaker.

The first few pages of his book is him at a very young age, the pages dancing with the wording of a child— done in such an artful manner—as he begins his tale of an ordinary childhood. His family life is that of devout Christians living in Virginia. Along with his father, mother, and younger brothers Matthew and Luke, he lives like most kids. Homeschooled and with a yearning to play soccer, the young Josh is active and lives a happy life. That all changed when he is told he has Cancer.
He had an incredibly rare bone cancer in his thigh which left him with a 50/50 chance of survivial. He begins a year of excruciating chemotherapy treatments. When they finally end, his family is ecstatic to be done with the ordeal, but the cancer has not disappeared. The other alternative, his only hope; Amputation.

Most nine-year-olds enjoy spending their days participating in sports, running around, and hanging out with their friends, but for Josh Sundquist nine was a tough year. That was the year he lost his left leg and that is just the start of his legacy. A few years later once the cancer was deemed cured, he began skiing at a local mountain. He fell in love with the exhilaration of the sport and the freedom he had not felt in years. Even without his leg, he found a way to run once more.

I won’t spoil the rest of the book as it is something one must read on their own to understand the beauty of his story and the message of rising against the odds, which seemed stacked so high. His downfalls will give you heartache and his triumphs will have you cheering him on as he races towards his Olympic dream. As he races down the mountain you will be praying for his victory and whispering to yourself, “Just Don’t Fall, Josh, Just Don’t fall” . 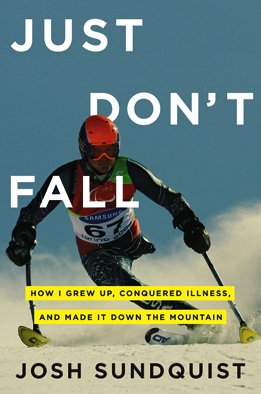 
Buy from Amazon
The author's comments:
Not sold on him yet? Check out his YouTube channel, where he is a frequent vlogger, or his website with all his information. I guarantee once you do, you will be a Josh Sundquist fan for life.
Post a comment
Submit your own

View profile
Thank you very much. it means alot to me that you wuld read and comment on my review :) Josh is just awesome, I highly recommend the book (as you can tell lol)
ael429 BRONZE said...
on Jul. 18 2011 at 11:49 am
ael429 BRONZE, Waterford, Michigan
3 articles 10 photos 20 comments
View profile
Your review is well-written, which makes me trust your judgment of Sundquist's book. I can tell you've become a true fan.