Favorite Quote:
"It makes me happy when I see teenage girls who clearly don't fit in, gives me hope that the future might still have personality" - Haley Williams

Life of Pi by Yann Martel is a novel of religious allegory and fantastical human and animal relationships, all intertwined with a ceaseless sense of wonder. The novel takes place largely in the Pacific Ocean, as young Pi Patel tries to survive a shipwreck in the company of a hyena, a zebra, an orangutan, and a 450-pound Bengal tiger. In an awe-inspiring display of intelligence and will to survive, Pi spins a remarkable story. His unending fight and determination make him seem much bigger than he is, almost godlike in his mindset and patience, yet still small and timid like the child he is.

Martel brings Western and Eastern culture together as the reader follows Pi's never-ending love and desire for religion. Having lived in India, Mexico, France, and Canada, Martel brings a sense of each culture to this novel, making it all the more rich and textured. He also spent two years studying zoos and zoology before he wrote Life of Pi, giving it a very realistic feel.

Pi explores beliefs from Christianity, Islam, and his native Hinduism, making claims to all three but never pushing any on the reader. Although the jacket description reads “a story to make you believe in God,” it really just opens the reader up to the wonder and awe that Pi experiences from religion, giving even the strongest atheist at least some admiration for the character. By using a young narrator, Martel doesn't discuss religion, but rather faith and spirituality, which is much more relatable for readers.

The joy that Pi finds in the simple things is a breath of fresh air, making the reader feel content every time she turns a page. Martel's beautiful descriptions and attention to detail make this novel all the more realistic and enjoyable. He makes an easy transition from the Indian landscape to the monotonous blue of the Pacific Ocean, making you feel as if you're sitting right next to Pi in his lifeboat. Although the reader must have some willing suspension of disbelief to enjoy this novel, the settings and the character of Pi are both very believable and relatable.

I strongly recommend Life of Pi for any reader who's looking for adventure, devotion, and a chance to feel truly humbled. 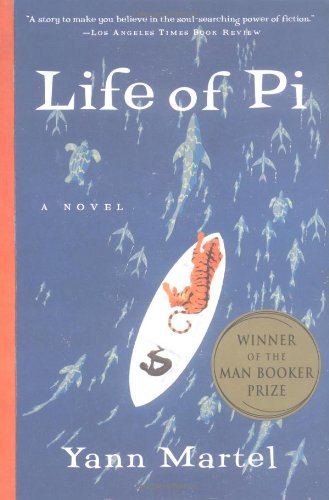 Favorite Quote:
“If the person you are talking to doesn't appear to be listening, be patient. It may simply be that he has a small piece of fluff in his ear.”
― A.A. Milne, Winnie-the-Pooh

View profile
I loved this book...you've definitely hit upon a number of qualities Life of Pie has.  Nice work!