Who said comic books weren’t serious? Resistance is the first book of the Sydney Taylor Award-winning series, portraying the story of two children in World War 2 France, as their whole lives suddenly get sharper and realer when the war threatens their Jewish friend. Paul Tessier is a young man in unoccupied Southern French who suddenly finds himself taking on the role of the man of the house after his father was taken as a POW by Germans, while taking care of his precocious little sister, Marie, and spending time with his best friend, Henri. However, further trouble erupts when Henri’s parents disappear and Henri is in danger of being persecuted for his Jewish heritage. In an incredible gesture of friendship and bravery, the Tessier siblings offer Henri sanctuary by hiding him away from the Germans, and soon find the faces of the French Resistance, men and women fighting for freedom and intelligence against the Axis powers, in their own small village! Soon, the three children, Paul, Marie, and Henri join the Resistance as some of the youngest recruits ever to help out whatever way they can to help. Neglecting nothing, including food shortages, deportation, and Nazi brutality, Resistance joins the likes of Lois Lowry’s Newbery award-winning book, Number the Stars, in its youthful perspective of war, pointing out the obvious idiocy of war and discrimination, while highlighting the confusion, horror, and fears of a changing world, and the shocking transformation of childlike innocence into mature bravery. Resistance, written by Carla Jablonski and drawn by Leland Purvis, is as spoken in the words of popular children’s author, Jane Yolen, “A forceful reminder of both the broad horrors and the small braveries of that period of history, things we should never forget. ” For those who underestimate the power of graphic novels or comics, Resistance, is an well-done mastery of art and storytelling that candidly portrays the realities of World War 2 to cross-generational audiences. 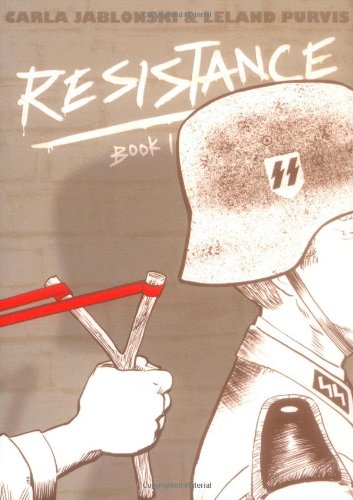