"I told Watson that if I ever write a story it will be to correct the millions of misconceptions created by his imagination." says Sherlock Holmes. But will he ever be able to write that story? Yes, Holmes is now living a quiet life in Dover, tending to his bees, with no visitors begging him to solve their mysteries, but Holmes is in his ninties, and begging to lose his memory. That is particullarly discouraging when it comes to one subject: The case that made him retire. All Holmes knows is that the last case Watson wrote ended completely wrong. And now the detective has to solve his own mystery: What happened to Ann Kelmot?

This version of Mr. Homles, portrayed by Sir Ian McKellen, is perhaps the best in several decades, being accurately gentlemanly, moody, and yet fatherly. He was never really a 'people-person', but as the film progresses he becomes more and more attached to his housekeeper's young son Robert, who he comes to rely on as his spark of inspiration in attempting to remember the ending a tragic mystery. This movie's main theme is not on how brilliant Holmes is, or how many one-liners can be packed into it, but on loss. The loss of memory, the loss of a husband, the loss of a friend, the loss of children who were never born, the loss of a father, and the loss of a wife. It is a refreshing change.

Though this film has no violence shown, there are several implications and end results visible, such as Robert swollen and unconscious after being attacked by insects and a woman walking with erie calmness towards an oncoming train. Holmes hints that he regrets not running away with said woman, who was married. Robert and his mother argue a lot (until Holmes tells Robert not to). Holmes takes drugs.

This story of Sherlock's later life is based off the book A Slight Trick of the Mind by Mitch Cullin. 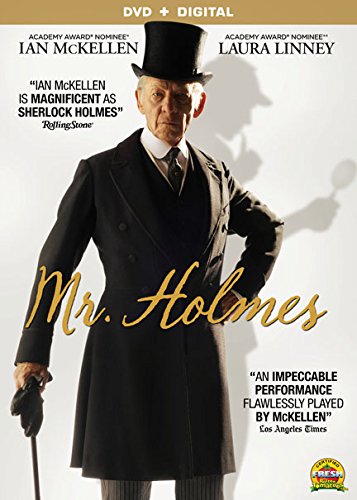 Everyone loses something. Even Sherlock Holmes. But how many grieve?