My World by Justin Bieber

"Justin Bieber!" excited fans cheer.
"Justin Bieber," the haters groan. It seems like about half of teens are obsessed with him, and the other half couldn't care less.

Who is Justin Bieber? He's this 16-year-old kid with a remarkably high voice and the target of rumors and insults as well as praise and admiration.

Most teenage fans are into him and his music because he sings songs mostly about girls. Some people argue that he hasn't written any of the songs he sings, but in fact a couple of them are his own original works. He has been labeled a "teen heartthrob." Wow.

Personally, I think Justin needs to improve his image. Hoodies, tight jeans, sneakers, and fluffy hair. That's all good, but what about personality? He often mimicks popular rappers, and some of the lyrics in his songs suggest that he may be just the tiniest bit conceited. Example: "Many have called, but the chosen is you...." is suggesting that he's popular. And, "I'll buy you anything, I'll buy you any ring..." shows that he thinks he can win back someone's love with material items. Uh, no.

However, there's no denying he has talent. Sure, his range is waaayyyy up there, but how many people do you know that can sing, write songs, plus play guitar, piano, trumpet, and percussion? That's impressive...

There's been a lot of controversy over Bieber in the past few years. Remember when "4chan" tried to push rude things about him to the top of the Google Trends Hot Searches list? He's been the target of several rumors and pranks, especially on 4chan, Facebook, and Youtube. Plus no one can forget the issues he's faced with crowd control...he's had to cancel a few concerts/performances to protect his fans' safety. That must have been disappointing to his fans and him.

Like most pop stars, Bieber has appeared/guest starred on multiple TV shows, released a couple of albums, and participated in a few tours. :) His music videos, especially of the worldwide hit, "Baby" were popular on Youtube. (Although that song is so repetitive, a lot of people like to call it annoying!) Plus he participated in "We Are The World" for Haiti.

His album "My World" debuted platnium in the US. That made him the very first artist to have seven songs from a debut album rank on the Billboard Top 100. Then "My World 2.0" was released, receiving similar success.

I think that Justin Bieber is most definitely talented, but he needs to improve his personality and show everyone that he deserves positive attention. He is one of the most discussed and debated males ever to hit the planet, and I think everyone should give him a chance before judging him. 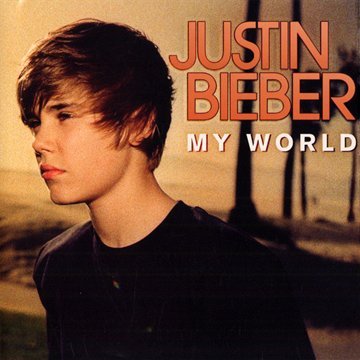 
Buy from Amazon Available on iTunes
The author's comments:
I'm not a Bieber fan, but I don't hate him. I think a neutral person is the best person to write a review about him, since the haters will most likely write negative comments and the fans will write positively. I hope everyone gives him a chance. :)
Post a comment
Submit your own