I don't remember what channel I was watching, what time of day it was, or where I was. All I remember was being entranced by the woman with the Russian name and spunky red curls. The song was “Fidelity,” one of the singles on Regina Spektor's fourth album, “Begin to Hope.” The quirky strength of her voice accompanied by simple music and her own piano playing was refreshingly different (as was her use of staccato), and I knew right then that I wanted to hear more.

Released in 2006, “Begin to Hope” was Spektor's first album under a major label. These songs aren't as barebones as her older work, but they are still uniquely Spektor, with her lyrics, versatile voice, and piano playing. Although she had a much larger budget for this album, Spektor stayed true to the music that got her fans hooked.

Along with her piano accompaniment, some songs have other instruments. On guitar in “Better” is Nick Valensi of The Strokes. Bass, saxophone, drums, and erhu are played on other songs, and Spektor plays guitar and percussion.

Besides having a voice that reaches almost any octave, Spektor is the most talented lyricist I've heard. Her songs tell stories, give strong viewpoints, and make fans think – hard. She has said that her lyrics are almost never about herself. “Après Moi” is dark and makes you question her sanity, yet thrills you all the same. (“Be afraid of the lame; They'll inherit your legs; Be afraid of the old; They'll inherit your soul.”) She also refers to poet Boris Pasternak, singing a verse from his poem “February” in her native Russian, adding to the aura of the song.

You can feel the emotion in the music, voice, and lyrics of every song on “Begin to Hope.” “Lady” is a good portrayal of everything Spektor is talented at: using her vocals in different styles (in this case jazz/blues), playing piano, and writing lyrics that make you hang on every word. “On the Radio,” with its upbeat tempo and humorous reference to the Guns N' Roses song “November Rain,” manages to slip in some obvious yet poetic advice on life. The simplicity of it all makes you think that there are messages in all her songs.

Not everyone wants to think every time they hit the “play” button, which means Spektor's music isn't for everyone. Those who are up for pondering and contemplating the lyrics are in for not just a treat but the whole Halloween candy stash.

Other songs on the album include “Summer in the City,” combining two almost contradictory elements – New York City (the topic of many Spektor songs, along with religion) and loneliness. “Samson,” originally released on Spektor's 2002 album, “Songs,” makes you feel so many different things, you can't quite pick an emotion. It's an unrequited love song of sorts alluding to Samson and Delilah. The lyrics (“You are my sweetest downfall; I loved you first; I loved you first”) stick to you like honey.

The deluxe version of the album (along with music videos) has six bonus songs that, cub scout's honor, are worth the extra bucks.

Profound lyrics that dance around your heart, an eclectic voice, and perfect piano accompaniment make for the pleasure and emotion of excellent music. 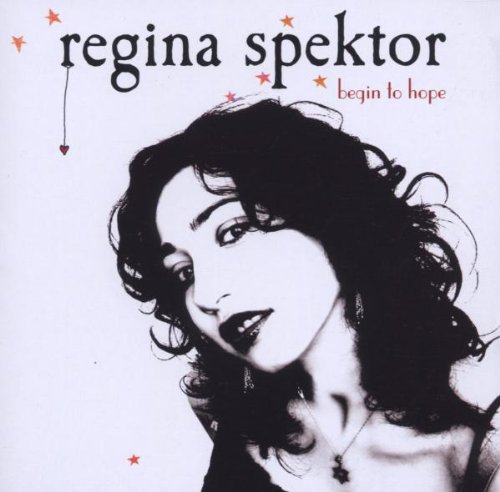 Hey, I saw your article in the magazine! That's really cool! I think it was really very well written. Most importantly, I'm totally in love with Regina Spektor. She is beyond compliments. Her music is...revolutionary.

Favorite Quote:
The room was very quiet. I walked over to the TV set and turned it onto a dead channel-white noise at maximum decibels, a fine sound for sleeping, a powerful continuous hiss to drown out everything strange."

Aw! I'm always so excited when I find fans of Regina.

I am always trying to introduce people to her music because I absolutly love her!

Her voice is so amazing!

I'm glad you talked about how she tells stories n stuff in her songs :)

I really hope after reading your article people go check out her music.