The Upsides by The Wonder Years | Teen Ink

The Upsides by The Wonder Years

You probably haven’t heard of The Wonder Years, and until a few weeks ago, neither had I. The Wonder Years are a six piece pop punk band out of Philadelphia, and while they’ve yet to actually hit the mainstream, I was blown away by their second record, The Upsides. Frontman Dan “Soupy” Campbell takes listeners on a fast paced, up beat day in his life, and he holds nothing back. By the time the twelve track, forty minute record is over, you’ll find yourself itching to give it another spin.

The album opener, My Last Semester, opens with Soupy reciting the band’s current mantra – “I’m not sad anymore”. The punk-infused lyrics tell the story of making a largely unpopular change in one’s life – dropping out of school and running away from the juvenile melodrama and mainstream lifestyle. With humorously specific lines addressing everything from “mall rat goth [kids]” to “fake tan girls”, Soupy picks apart every school clique before declaring in a high energy chorus that he simply doesn’t fit in with anyone but his closest friends.

The second track, Logan Circle, is simply a stand out track and an excellent example of The Wonder Year’s versatility. The next step on Soupy’s search for happiness depicts an epiphany that allowed him to escape the clutches of crippling depression, and looking back on various eccentric interests and anecdotes that kept him going during the hard times. “We just can't blame the seasons/The Blue Man Group won't cure depression”, the lyrics manage to be personal and endearing and the song’s pop influence is absolutely infectious.The optimistic chorus notably includes a callback to My Last Semester, another declaration that “I’m not even sad anymore”.

The next song, Everything I Own Fits in this Backpack fits perfectly as a follow up to Logan Circle. Now that Soupy has decided that he won’t let depression take him hostage, the next logical step is to start making some life changes. The heavy hitting guitar riffs keep the song chugging along as Soupy compares and contrasts his new home and his previous home, with a catchy chorus that once again calls back My Last Semester, decidedly not fitting in anywhere. Soupy bemuses that touring with The Wonder Years is just another form of running away, but that it’s all he has.

Dynamite Shovel is a fast hitting, angry one minute punk song that is reminiscent of the band’s debut record. The signature humor shines through once more, and the lyrics name drop the Westboro Baptist Church and subsequently curses them out. There’s not much to say about the track, but it perfectly expresses the standard teenage mindset- angry at the world, with any acceptable target finding its way to get under the skin.

In the fifth song on the record, New Years with Carl Weathers, The Wonder Years take the listener on the road with them, and as it turns out, touring life isn’t nearly as glamorous as you would think. Vans breaking down, sexting, Nyquil and pizza are all in a day’s work for punk rockers, and the down to earth lyrics continue Soupy’s signature style of sharing personal stories and calling out friends by name. The hard hitting drums and catchy guitar riffs once again take center stage, dropping out occasionally at the perfect moments. The optimistic chorus expresses a fervor of excitement shared by the bandmates, contrasting with their desire to return home.

It’s Never Sunny in Philadelphia follows and the guitar and drums take a more standard punk rock approach, and Campbell details his struggle with depression in the album’s darkest song. “Most days are bad days/ We can’t just wait for someone to pull me off of the concrete” croons the morbidly upbeat chorus. The song is one of the record’s strongest, despite depicting the band’s frontman at his personal weakest. “I can’t be left alone now/ For even a second” Soupy cries, drawing the reader into his personal struggles. The song closes strongly, with the two alternating refrains competing with each other for dominance.

The Wonder Years’ tales of tour continue with Hostels &amp; Brothels, a globe trotting punk rock song that name checks European locations from Leeds, Glasgow, and “Grey” Britain. The frontman shares an inspiring conversation with his father, and despite initial misgivings, he eventually concedes “Things got a bit lighter/I guess my dad was right”. The guitar and drums once again keep the song going, taking advantage of the song’s three minute length to stick to the pop punk playbook. The gang vocals chorus works much to the band’s advantage, with ringing guitars and timely drum fills.

Next up is Melrose Diner, the closest thing to a hit single. The catchy anti-love song takes shots at former romantic interests, and the humorous music video fits the band’s image perfectly—Soupy is an underdog, an everyman, a relatable cynic. The memorable lead riff keeps the song on the listener’s mind, and the drums hit harder than most of the album’s tracks. The chorus shines as one of the album’s simplest, yet most radio friendly; “I guess I’m just down, I guess I’ll be honest/I could use you around, I can’t stand the dork that you’re hanging with now”.

Continuing the same train of thought that delivered Melrose Diner, the next track is an anti-party song aptly titled This Party Sucks. Soupy holds nothing back in his lyrical assault on the Jersey Shore environment and the so called “GTL” lifestyle. The guitars range from heavy verse riffs to melodic solos and the drums hit just as heavy. “Say, say you’ll stay in with me tonight” asks the chorus, and Soupy makes it clear that a night in with the television is what he considers his scene. The song is more than complaining, with a humorous verse dedicated to Rupert Holmes and the Pina Colada jingle.

Hey Thanks is a surprisingly different track. The majority of the track is simply Campbell’s vocals accompanied by a catchy ukulele rhythm, and the heartfelt ballad is not without some of The Wonder Years’ classic self depreciation. Guest vocals from singer Rachel Minton and the trombone styling of Matt Belanger supply additional depth to the song, which closes with steady drums and electric guitar.

Washington Square Park, the penultimate track, is another song that was deemed worthy of being a single. “I’m looking for the upsides to these panic attack nights,” Soupy sings as casually references the record’s title. Matt Brasch and Casey Caveliere’s dual guitars provide the main attraction on this song, while Soupy’s lyrics draw thematically from the other songs on the album, with an angrily optimistic chorus. In the song’s closing minute, the band reinforces their message – sometimes growing up means you have to grin and bear it.

The final song, All My Friends are in Bar Bands is a look back on the band’s childhood years, calling to mind The Offspring’s “The Kids are Alright”. Rhythmic drums courtesy of Michael Kennedy keep the song steady, and the angry vocals from Washington Square Park make a triumphant return. Fans of Fall Out Boy’s “What a Catch, Donnie” will be pleasantly surprised when a flurry of guest vocalists make appearances in the closing minutes to once again remind the listener of the band’s mantra – “I’m not sad anymore, I’m just tired of this place/If this year would just end, I think we’d all be okay”.

The Upsides wasn’t intended to be a concept album, but it manages to be one all the same. The album is a whirlwind of emotional ups and downs, and the album is simply down to earth and relatable. The guitars are catchy and the drums are rocking, achieving everything one would expect out of a pop punk band. The Wonder Years have found their niche, and it seems things can only go up from here. 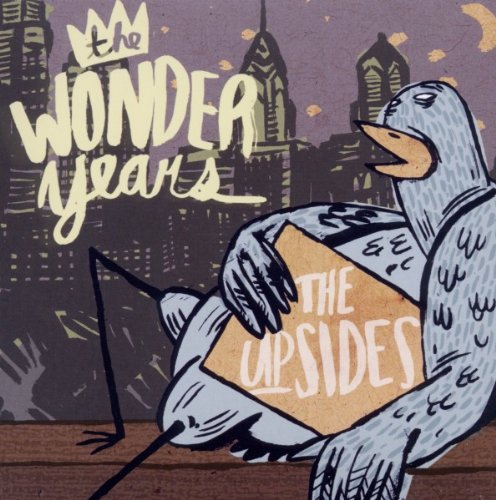 
Buy from Amazon Available on iTunes
The author's comments:
The best pop punk band you've never heard of.
Post a comment
Submit your own

Favorite Quote:
"Life's way to awesome to waste your time thinking about someone who doesn't treat you right." -Jack Barakat

View profile
The Wonder Years are one of my favorite bands, and I don't think they'll be mainstream...probably ever. I'm really happy that you like them, Their newest album "Suburbia, I've Given You All and Now I'm Nothing." It's really awesome, check them out.