That one moment before the credits start. A moment with room only for one breath and a blink of the eyes, or you'll miss it. That Blue Box. You'll miss it hurtling in from somewhere off of the screen. Then you're thrust into the time vortex, right there next to it. Two or sometimes three names flash across the screen accompanied by lightning and the thrilling music. The four count drum beats remind you of 'that episode', if you've seen it before. If you've stuck with it. If you're a Who fan. Or, in my case, a full-fledged, obsessed Whovian.

But, before you read further, you're probably going to want to know what Doctor Who is? I mean, seriously, what kind of title is that? It sounds kind of weird. What's with the title of this article? What does a blue box have to do with it?

Well, my friends, if those are your questions, you've come to the right place.

Doctor Who. Let me explain the title. Doctor Who is about a man. Well, he isn't really a man. He's an alien from a planet called Gallifrey in the constellation Kasterborous, which is a long way away from the Milky Way. He's a time traveler. But throughout the series, he doesn't have a name. He is nameless.

He's the Doctor. Simply the Doctor. Nobody except a handful of people know his real name, and even then, everybody is clueless as to what it really is. I think even the writers of the show don't know what it is. But he's wonderful. He's the Doctor. He's not 'Doctor Who', no, that's the show. He's 'the oncoming storm'. He's cool. From leather jackets to 3D glasses to bow ties and suspenders (braces), the Doctor's got the style.

"But wait," you say, "his sense of style doesn't sound that great, those things would clash..."

Oh, have I forgotten to mention...? Silly, silly me! The Doctor's an alien, like I've said. Aliens don't function like us. The Doctor is a Time Lord, an ancient race of aliens that were in charge of making sure history went according to plan. But how did they do that? Right. Something really, really simple called Time Travel. But time travel can be dangerous, can it not? So that's why Time Lords are equipped with a PAIR of hearts, not just one, but two, and a backup system.

Say you've been stabbed. Sorry to be so blunt about it, but it could happen. You're dying, but you're not dead. YET. If you were a Time Lord, you would start glowing. Gold stuff would start flying off of you, and then you'd explode in a fury of gold and power. That's called 'regenerating'. When a Time Lord comes close to dying, he can save himself, only up to thirteen times though. The Doctor's saved himself ten times so far. But when he regenerates, every molecule of his body changes. He changes appearance, everything about him is different, even his personality. But it's the same person on the inside.

In the quote 'real world', this means bringing in a new actor.

The show's been on since 1963. You can imagine they've had to bring in eleven actors. They can't have the same guy playing him from 1963.

"Right, got the title," you sigh, becoming bored. "Can we move on? What's the show actually about?"

Well, I've really already answered that. This show is about time traveling. The Doctor picks up people along the way, whom he calls his 'companions', or 'assistants.' A lot of times they become something 'more' than that, you know, but in the end, whether it be through their death, choice to leave, or being kicked out of the TARDIS (his time machine), the Doctor always ends up alone.

Another thing: he's the last of the Time Lords. The rest of them were wiped out in the Time War with the Daleks, which are an ancient race of evil machine type of things. They may sound ridiculous, they may look ridiculous, but I know many children in the sixties hid behind their sofas when the Daleks came on the screen. They've become nightmarish. Since this show has been on air since 1963, they really can't change the effects toooo much, you know? Then it would be just like, "well, THIS isn't Doctor Who anymore!" So the effects can sometimes be, well, just...adorable. We'll put it that way and leave it there, alright?

Time And Relative Dimension In Space. It's his Time Machine, and it's stuck in the Shape of a 1960s England police phone box. It's blue, and it's boxy, and it's awesome, and a cardboard replica of one is sitting in my room. Enough said there, oops, think I've already said too much. But when he would time travel in it, a circuit board in it called the Chameleon Circuit would change the TARDIS' appearance to blend in with it's surroundings. Well, that's been broken since the show began in '63, and I don't think it's going to get fixed any time soon.

To the actual show!

This show is now being under the head writer of Steven Moffat. We're in the Moffat era of Who-dom. Matt Smith plays the Eleventh Doctor, and he's alright. He got a lot of flack in the beginning for being too unknown to play the Doctor, but we stuck through, and he's been alright. I'm more of a Tennant person. David Tennant played the tenth Doctor until 2009, and personally, he was my favorite. He played the Doctor so dimensionally. I've also met David Tennant :) And he's lovely. But Matt Smith is more believable as an alien, you can seriously believe he's from another planet. He carries this show on his back and shoulders like no other, though. Well, maybe David Tennant. But this season, well, seasonS, five and six (Matt Smith's presently), have been different. They've been darker, they've been scarier. Tennant and Eccleston's (the 9th) episodes could be more lighthearted. Tennant was more serious, Eccleston was the serious-est, and Smith is goofy, but their seasons have been just the opposite.

Well, I gotta tell you something. Doctor Who really hasn't gone from 63 to now unscathed. It was canceled in the late eighties (or early nineties, one of the two) because Who-dom was dying out. The BBC picked it up again in 2005, beginning with the 9th Doctor, Christopher Eccleston. He only played it for one year, where it was handed off to David Tennant, who carried the role through three fantastic seasons that I've watched many, many times. Now it's Matt Smith, and it's the dawn of a new era of Doctor Who.

Doctor Who is amazing. That sums up the whole article. To be honest, you didn't even have to read this whole thing. Don't you feel mad now? Of course you don't! You're going to go watch Doctor Who now, starting with the Christmas Invasion, Season 1 Episode 1. By the way, they restarted the seasons when they revived it, so when I say season one, I don't mean from 1963. But you're going to do it. You're going to watch it. You're GOING to. I need someone to watch it, because none of my friends do and nobody knows about it in America :/ 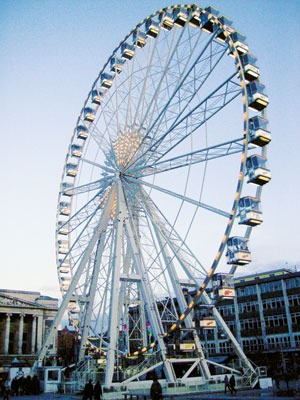 The author's comments:
Doctor Who is a British sci-fi show that is just awesome. Just amazingly awesome.
Post a comment
Submit your own

Favorite Quote:
A writer never has a vacation. For a writer, life consists of either writing or thinking about writing.
— Eugene Ionesco

As well as pretty much everything that comes out of John Green's mouth.

View profile
Wow, great review! I started watching Doctor Who a few months ago, and I've been turning into a Whoovian day by day. AWESOME show!