Ok, I know this show started a long time ago, but I haven't gotten around to writing this review until now. So, Elementary. Named after Sherlock Holmes's famous line... That he only really said a couple times. The title alone reveals the creators' ignorance of the detective's original stories. If that isn't enough to convince you, there's plenty of other indicators that either the writers never read Sherlock Holmes stories, or they just don't care that everything's all wrong.

I'll start with the setting. I don't mind the fact that it's set in modern day. I've seen it pulled off perfectly in the BBC's version of this show, "Sherlock". Holmes stories were never just about the Victorian era. They were about the adventures and the characters and the cases. Sherlock Holmes was a very modern man in his time, using telegraphs and even telephones when they were invented. No, the modern setting isn't a problem. It allows the audience to see Holmes as he was meant to be seen: contemporary and cutting edge. I do have a bit of a problem with the New York City setting though. While I know they're trying to appeal to an American audience, there's just something about Sherlock Holmes and London. Sherlock Holmes IS London. He's as much a part of it as Big Ben or the London Eye. An American Sherlock Holmes is like an American James Bond: it just doesn't work. I know I said that Sherlock Holmes was never about the setting, blah blah blah, but I don't see London as part of the setting. London is a living breathing character in the stories, constantly changing and growing. To me, leaving out London is like leaving out Mycroft or Mrs. Hudson (which they did). You just don't. But they did.

Now for Watson. Dr. JOAN Watson now, as played by Lucy Liu. While I have nothing at all against strong female characters and female empowerment (I'm a girl too), making Watson a woman is just going too far. The dynamic between Holmes and Watson has always been one of friendship and companionship, loyalty and devotion. Never romance. (Hey, it was the 1800's, they weren't THAT accepting yet.) But now, there's that underlying tension of "will they or won't they?" that's already been the heart of so many other TV shows (The X-Files, Bones, Castle, Psych, the list goes on...) Then there's the fact that she's NOT EVEN AN ARMY DOCTOR!!! Yes, she's apparently an ex-surgeon haunted by the fact that she let someone die on the operating table. But being in the army was a strong part of the original Watson's character. It was the reason he was so loyal to Holmes, why he was so willing to put his life on the line, why he was an adventure junkie. This new Watson lacks that. And what's a "sober companion" anyway? Who hires a random person to be their friend and make sure they don't do drugs? That's called a nurse, people. Or a babysitter. The original Watson didn't need money as an incentive to stay with Holmes (as much as he deserved it).

But enough about Watson. I'll move on to Holmes now. Jonny Lee Miller's Holmes isn't bad. He performs the character well at least, with high speed deductions and no social skills whatsoever. The problem I have with this Holmes is the writers' fault, once again. The first time we meet Holmes, he has just finished having sex with a random woman. For fun. Because he was bored. That's just an insult to the idea of Sherlock Holmes. The original Holmes stated numerous times that he had no interest whatsoever in the opposite sex, much to Watson's confusion. Holmes never had any romantic interests, not even Irene Adler. She was just another adversary who happened to beat him, which he found fascinating. But that was only because he had never been beaten before, never met a worthy opponent. But no, Elementary's Holmes has sex just to pass the time. Clearly the writers saw something in the stories that I missed somehow. Or, like I mentioned before, maybe they just didn't bother to read them. I do have to admit that their whole drug-addict-rehab thing is based loosely on the books, as Holmes did occasionally shoot cocaine in a seven-percent solution. But he was by no means an addict, and never used it while on a case.
All in all, I'm not impressed. The creators took an unoriginal idea and made it even more unoriginal. It shares nothing with Sherlock Holmes except for names. Sherlock Holmes could have been named Patrick Jane for all the resemblance he bears to the famous detective. It's just another crime drama, not another modern adaptation of Sherlock Holmes. So if that's what you're looking for, look elsewhere. Perhaps the BBC's "Sherlock"...? 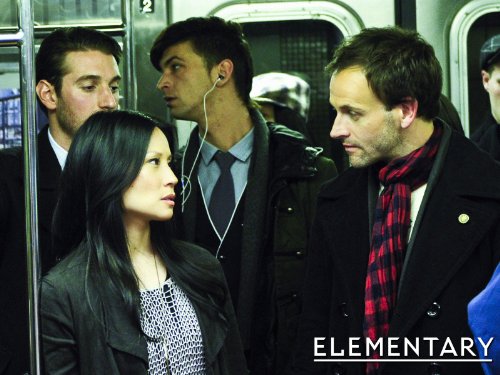 
Buy from Amazon Available on iTunes
The author's comments:
Please keep in mind that I only watched the pilot, so I don't know if things have gotten any better. I couldn't be bothered to find out.
Post a comment
Submit your own